Don’t ask Natalie Hernandez-Pachon to choose a favorite activity during her four years at Ithaca College — she liked all of them.

“They’re all important to me because they represent different aspects of the college experience,” she says.

Hernandez-Pachon served as co-historian for the class cabinet of 2010 and a member of Sigma Alpha Iota. She has given campus tours as a president’s host, helped recruit new students as an admission ambassador, and served as a resident assistant for three years. The recipient of the John P.E. Brown Scholarship and a two-time Martin Luther King Jr. scholar, she has garnered several awards, including the ALANA Academic Achievement Award, the Academic Persistence Award, and the Peggy R. Williams Award for Academic and Community Leadership.

Of her honors while at IC, Hernandez-Pachon is most proud of the Williams Award, because it encompasses both her strong academic performance and her activities outside the classroom.”

“Normally, I’m the type of person who doesn’t really want recognition for things I do,” she says. “I think the Williams award lets me know that people recognize that I work hard. It feels good to know other people are noticing.”

Hernandez-Pachon entered IC as a health preprofessional major because she was considering attending medical school. She decided to switch to speech-language pathology and audiology, in large part because of the experiences of her older brother, Javier, who was struck by a car at the age of six.

“The doctors thought he would remain in a vegetative state for the rest of his life,” she recalls. “To their amazement, he recovered almost to his full potential.” Javier still stutters, she says, whenever he has difficulty expressing his ideas, which happens when he is especially nervous, excited, or angry.

“I do not like seeing children, adolescents, and adults like my brother torment themselves,” says Hernandez-Pachon. “Watching my brother struggle to explain himself in both Spanish and English increased my interest in speech-language pathology.”

Family has always been important for Hernandez-Pachon. “I would not be the person I am today without the guidance of my parents and the values they have taught me.” Her sister, Veronica, just completed her freshman year at IC. “I couldn’t have asked for a better support system for my last year.”

After graduation, Hernandez-Pachon will head to Nazareth College in Rochester, New York, to pursue her master’s degree in speech-language pathology. She eventually hopes to run a free clinic, geared toward helping people with speech disorders get proper intervention. Money, she believes, should never impact the decision to get therapy.

Hernandez-Pachon readily admits she is motivated to “make a difference” and draws strength from the late author James Baldwin’s observation, “Not everything that is faced can be changed, but nothing can be changed until it is faced.”

“It is important for me to help those around me without the intention of getting something in return,” she says. “When I’m involved with a project, I want to do my best to achieve success. I feel the same way about what I do in my personal life. Any one person can make a difference; it’s more a matter of that one person taking the first step.” 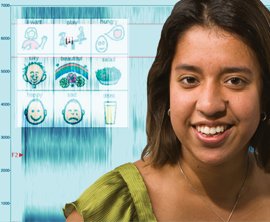