College has been weird. I was supposed to know where I was going by now — or at least have some inkling. Instead, I leave feeling slightly older, slightly more well-read, and just as hopelessly lost. I came into this period of my life expecting to be pointed in the right direction. It didn’t happen, and I’m left wondering if the past four years have been worth the price of admission (figuratively and literally).

To be sure, the experiences are invaluable. I wouldn’t have grown nearly as much had I gone directly into the workforce; friends on that path with whom I’ve kept in touch are saddled with credit card debt and DWIs. My peers here are young, healthy, idealistic — and going places. The world’s ills are known, but we think we can change things. Naiveté? More like innocence. I don’t share their optimism, but it’s heartening nonetheless. We can afford to hold radical ideals, to make bold statements. William Levitt is quoted as saying that “no man who owns his own house and lot can be a communist. He has too much to do.” I’m not impressed with his ticky-tacky boxes, but the guy has a point.

Despite having been funneled through higher education, for the moment we’re tied down only by student loans and perhaps car payments. We still have the ability to be unabashed radicals. The present is always called the “deciding moment” in a person’s life, but I think this truly is that moment. The decision to attend college was mostly decided for us (by our parents, by the expectations of others). We had some say in what we studied. And now, what we do with our expensive little diplomas is wholly up to us.

What to do? For myself, it’s easier to determine what not to do. Moving back in with the parents would be a mistake. And further education is not in the cards, at the moment at least. I’m worn out; I need relief. The drudgery of a 9 to 5 is appealing. But I’m not ready to fully embrace it, to buy into Levitt’s America. I still have the hope of doing something with my life. Something worthwhile or, at the very least, interesting. Right now, the famous quote from the film Fear and Loathing in Las Vegas seems appropriate: “I felt like a monster reincarnation of Horatio Alger: A man on the move, and just sick enough to be totally confident.”

Zeke Wright was a spring 2007 writing intern for ICView. He  graduated in May with a double bachelor’s degree in writing and politics. He will continue to write, now as a freelancer, for us. Read some of his other recent stories: a profile of Therese Forton-Barnes '85, who is reclaiming the wood from trees killed in a freak October 2006 snowshorm in Buffalo to create public art; and "Brave New World," about the online universe Second Life and its use in classrooms by faculty in Ithaca College's Park School of Communications. 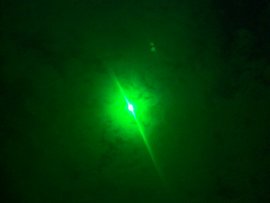