Cindy Bradley '00 plays jazz trumpet and has released three albums. She was also a quarterfinalist for the Grammy Music educator award.

Go on. Pick a trumpet, any trumpet. Just don’t snag the bedazzled pink one—or that pink-and-black “Dizzy” model. Those are Cindy Bradley’s.

If you infer that Bradley has a bit of flair, you would be correct—but also guilty of understatement. Designing Harrelson Trumpets is just the tip of the iceberg. Bradley leads something of a double life. Monday through Friday she’s a band teacher at an elementary school in Franklin Lakes, New Jersey. On the weekends, she’s skipping across the country as an award-winning jazz musician, playing trumpet and flugelhorn.

“It’s crazy,” Bradley says. “And I never want to give it up. I love doing both.”

Bradley had practice perfecting her juggling act at Ithaca College, where she double majored in jazz studies and music education. After she graduated in 2000, she earned a master’s in jazz trumpet performance at the New England Conservatory. Right after grad school, she got her first teaching gig. She had to wait a bit longer for her first record deal.

Over the past five years, she’s released three albums: Bloom, Unscripted, and Bliss, which dropped in May. Bradley recorded her second album after she had ended a romantic relationship and both her mother and grandmother had received cancer diagnoses.

“I was really in a state of despair [while recording Unscripted], and it ended up being a really emotional, cathartic kind of thing,” Bradley says. “Since then, three years have gone by. I’ve gotten married; my mother is cancer-free. Life is really good, so this most recent CD is called Bliss.’”

Bradley met her husband, also a professional musician, while they were playing together in the horn sections of old soul bands. They still tour together, and each has an understanding of the rigors of their shared profession—and the freedom to pursue it.

“He’s someone who understands what I do, and I never thought I’d find that,” she says. “Performing is what has always made me tick. It’s what I always wanted to do.”

Performing might make Bradley tick, but her heart lies in teaching. She is adamant when she says that it’s more than just a day job.

“Exposing young kids to different kinds of music is going to keep it alive, and teaching is fulfilling in that way; it gives my life meaning,” Bradley says. “When music programs are cut, I think about how lost I would’ve been if I didn’t have that band room to hang out in.”

Even amid the hustle of Bradley’s life, IC is ever-present.

“I bump into a ton of musicians and educators who went to IC,” Bradley says. “It’s very cool. I’m in my 30s and they’re in their 50s, and we can talk about the same professors.”

Bradley also points to her time on South Hill as positive for her as a human being. She took classes on Buddhism. She became a vegetarian. She appreciated the freedom to explore things besides music.

“It all kind of started in Ithaca—it really did,” Bradley says. “It was a place to grow as a person and figure out what was important to me. There were so many opportunities with the classes I took and the people I was around. It made for a well-rounded education.”

Visit cindybradley.com to hear her music. 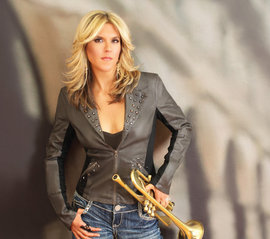 "Performing is what has
always made me tick.
It’s what I always
wanted to do."
– Cindy Bradley '00