Poetry for the Ages

The Who said it bluntly in the lyrics to “My Generation”: “I hope I die before I get old.”

Without a doubt, aging has gotten a bad rap. Ithaca youth, however, sang a different tune last August.

The forum was Young Poets Night, hosted by the IC Gerontology Institute’s Linden Center for Creativity and Aging at Longview, a residential senior community located across the street from the College. The center had sponsored a contest that offered cash prizes to area high school students who submitted  poems about what growing old means to them. Winners read their poems at Longview.

The Linden Center’s mission is to make college students and the community more aware — and less prejudicial — of the aging process. John Krout, the institute’s director, says he and his colleagues look to teach, and “unteach,” some of society’s negative perspectives on aging.

Amber Capogrossi, a senior at Newfield High School, was awarded second place in the contest. Her grandfather died last winter, and she says she entered the contest to connect with his generation.

“I wanted them to see that they’re not alone,” Capogrossi says. “They still give back to their community, and we appreciate that.”

The Gerontology Institute hosts multiple events throughout the year that encourage College students to cross Route 96B and connect with the members of an older generation who live at Longview. The Linden Center also hosts an annual conference. This year’s, held on October 1, covered the topic of creativity and aging.

“It’s not like you lose artistic expression after 21,” Krout says. “From day one, humans

express themselves artistically. Creativity defines the human condition. [And] being creative is a positive influence on the aging process. Studies show that those who are engaged in the creative field are healthier socially as well as mentally — and, in turn, physically.” 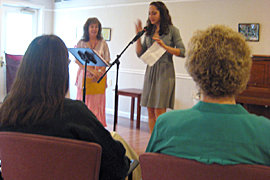 A face
Tells stories
Of memories new
And memories old,
Etched deep
In the lines of age.
From the crinkles
Around his two
Bright, sparkling eyes,
To the laugh lines
That I
Will always remember.

They are lines of Joy.
Happy summer days
Playing bocce ball,
The enjoyment
Of Euchre,
Trionminos,
Yahtzee.
Just being
With family.
The hugs
And kisses
And smiles.
All are memories
That left their mark.

Lines of Accomplishments.
From working
His own business,
Fixing the broken
Down cars
Almost like magic,
To running
A family,
And keeping it strong.

Lines of Wisdom.
Words shared
Unselfishly,
And continuously
With all

Advice,
Sympathetic words,
Loving words,
Teaching words
In lectures
We all had
At least once.
Wisdom of years
Well spent
And shared
With all
To help
And comfort
And guide.

Lines of Love and Life.
A caring friend,
A loving husband,
A strong father,
An enthusiastic grandpa,
A great-grandfather,
So many he loved.
So many he cared for.
Even
The unknown
Stranger,
Was helped,
Just as
The Good Samaritan
Helped the robbed man,
When no one else would.

Lines of
Unlimited definitions
Danced across his
Unforgettable face.
Lines that told
The long stories
Of his eventful life.
They tell
Of his love for us all.
But the face


Is only a temporary mask.
Inside
Was a lively spirit,
Who lives on
In me,
And in you,
Through the stories
And kindness
Of his face.

In heaven
He sees
His family
And friends.
His smile transfixed,
His loving gaze,
With bright, sparkling eyes,
Shines down
On us,
Forevermore.