Q & A with Luke Keller

What is infrared astronomy?

LK: Infrared astronomy is astronomy that uses infrared light for observations instead of visible light. Visible light is only a small part of the electromagnetic spectrum. In fact, most of the light coming from the universe is not visible to our eyes or to visible-light cameras. If we rely on telescopes that record only visible light, we’ll have a very incomplete picture. Some telescopes on the ground are optimized with optical systems and instruments that allow astronomers to observe in the infrared, but much of the infrared spectrum is obscured by water vapor and carbon dioxide in the Earth’s atmosphere, so to observe in those parts of the light spectrum we need either a spacecraft-based or an airborne telescope.

LK: Built at Cornell University’s Center for Radiophysics and Space Research by a scientific team directed by Cornell professor Terry Herter, FORCAST (Faint Object Infrared Camera for the SOFIA Telescope) is the first of eight instruments that will be installed on the telescope over the next several years to capture images of celestial phenomena and to measure physical characteristics such as their chemical compositions, temperatures, and motion. (As part of Herter’s team, Keller completed the FORCAST optical design and led development of the software that astronomers use to process and analyze images as they are recorded in flight.)

What advantages does SOFIA have over ground-based observatories with infrared capabilities?

LK: The moisture in the Earth’s atmosphere absorbs much of the infrared spectrum and, therefore, obscures the images of objects outside our atmosphere. SOFIA cruises at an altitude of 41,000 feet, which puts it above more than 99 percent of the water vapor in the Earth’s atmosphere. Also, SOFIA, unlike observatories on Earth, is not limited to a fixed geographical location. Some astronomical events are observable from only specific locations on Earth, and those may not be near existing observatories.

What advantages does SOFIA have over infrared satellite-based observatories?

LK: When equipment malfunctions or becomes obsolete on a satellite, it is often impossible (or very expensive, as in the case of the Hubble Space Telescope) to repair or to upgrade as technology improves. Because SOFIA returns to Earth after every eight-hour flight, repairs and upgrades will be routine, without the necessity to launch another spacecraft into Earth’s orbit.

Is SOFIA the first airborne telescope?

LK: Despite its novelty, SOFIA follows a long history of airborne astronomy that started with observations made from biplanes in the 1920s and ’30s. In the 1950s, ’60s, and ’70s, a modified Convair CV-990 with a small telescope discovered ice in Saturn’s rings. Sadly, that airplane crashed midair with another aircraft in 1973. During the same period, NASA flew a small telescope to high altitudes in a Learjet. Most recently, NASA’s Kuiper Airborne Observatory, a modified Lockheed C-141 cargo plane, operated with a one-meter infrared telescope from 1974 to 1995. Though capable of flying at 45,000 feet, the cabin was subject to sudden depressurizing and wide temperature swings. Still, the observatory was a workhorse for infrared astronomy and enabled discoveries of the rings of the planet Uranus, the thin atmosphere of Pluto, and direct evidence of the super massive black hole located in the center of our home galaxy, the Milky Way.

What do scientists hope to learn from SOFIA?

LK: By offering unprecedented views of light that do not reach telescopes located on the ground, SOFIA is designed to probe our origins and promises new discoveries in many areas of current astrophysical investigation, including

•   the process of star formation in the Milky Way,
•   activity surrounding the black hole in the center of the Milky Way galaxy,
•   the formation and evolution of planets in star systems beyond our own solar system,
•   the composition and structure of planetary atmospheres,
•   the role ultraluminous and very red galaxies — which emit at least 90 percent of their light in the infrared — play in    the formation of the early universe, and
•   the conditions under which potentially life-generating and life-sustaining molecules are formed and processed in interstellar space. 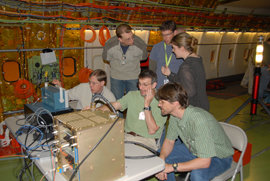