Tim Hauck ’03 and Matt Podolsky ’06 are helping to bring North America’s largest flying land bird back from near extinction. by Aaron King ’09

Each morning, Tim Hauck ’03 and Matt Podolsky ’06 are greeted by the rising sun over the Vermillion Cliffs in northern Arizona. The solitude of this remote place is broken by their morning stirrings, the endless expanse of blue sky interrupted only by jutting edifices of earthen swirls of red, yellow, and brown. From their lodgings, they grab their gear and a bite to eat before making the short trip to the cliff rim, some 1,500 feet above the valley floor.

Here, somewhere between paradise and wilderness, Hauck and Podolsky dutifully wait. With their binoculars, they peruse the skies for the largest flying land bird in North America — the California condor.
Hauck and Podolsky are field biologists with the Peregrine Fund, a group focused on the conservation of birds of prey. They are part of the team that is reintroducing and managing condors in the Grand Canyon and surrounding areas.

“We’re releasing the birds with tags and radio and GPS transmitters attached so that we can keep track of their movement,” Podolsky says. “We’re just trying to keep birds alive and healthy — that’s our primary goal in tracking them.”

While that goal may sound straightforward, it was only 25 years ago that the condor population numbered 22. Today, the Arizona site alone is home to 75 wild condors. It is, to date, the most successful of the project’s reintroduction sites. Hauck has been with the project since mid-2005 and has seen marked progress.

“When I started, there were probably around 50 California condors in Arizona,” he says. “It’s a unique situation out here with amazing nesting areas, very remote. This is a special population that has the best chance of thriving.”

The one remaining hurdle is the threat of lead poisoning. Lead shot has been widely used by hunters for years. One of the condor’s primary sources of food is gut piles — the remains left by hunters after they clean their kills in the field. If the animal was shot with lead ammunition, the feeding condors could be in danger.
“We often see hundreds of microscopic fragments of lead in the gut piles and carcasses left in the field,” Podolsky says. “This is what condors are feeding on, and it’s extremely toxic.”

Despite the team’s best efforts to remove contaminated piles from the field, three or four condors are lost each year to lead poisoning. As a result, Hauck and Podolsky spend a lot of time trapping the birds and testing their blood-lead levels.

Nonetheless, progress is real and steady. They have been largely successful in educating hunters about the perils of lead ammunition, and the Peregrine Fund has partnered with the Arizona Game and Fish Department to provide a free, voluntary, nonlead ammunition substitution program. The program has had 90 percent compliance in the area around the condor release site.

Witnessing the dramatic recovery of the condor, once so near extinction, has profoundly affected Hauck and Podolsky.

“The way this project is run can serve as a good example for wildlife conservation efforts in general,” says Podolsky. “It’s really rewarding stuff for all of us here.” 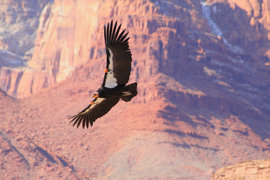