The second act of Kiss Me, Kate opened at Studio 54 on Broadway this year with an unusual performer on stage: Greg Thymius ’86, playing a jazz clarinet solo just as the cast begins performing the showstopper song “Too Darn Hot.”

Like the others, Thymius wore a white shirt and suspenders, blending right in with the dancers swirling around him. “It’s very inspiring to be that close to the dancers and watch them and see what they do,” he said. “And the arrangement gives me a little bit of freedom to do some more improvising than when I’m playing in the reed section.”

The idea to bring the clarinetist onstage came from the show’s Tony Award–winning choreographer, Warren Carlyle, known for his creative twists on Broadway revivals. Carlyle felt the musicians had become invisible to the audience and wanted to show that they are an integral part of the production, Thymius said.

“Warren told me, ‘Music and dance have become more and more separate in the public’s mind, and that’s wrong. That’s why having a musician on stage and really having you interacting with the dancers and being part of the action was important to me,’” Thymius said.

Though it is still rare to see pit musicians on stage, it has become increasingly popular on Broadway in the past decade. Besides Kiss Me, Kate, Thymius has played on the set of two other musicals—The People in the Picture (his first full-time position in a Broadway show) and Music Man (a substitute gig).

His appearance on Broadway, however, was not the first time Thymius has played an instrument in a performance on stage. The summer before graduating from IC, Thymius joined the jazz band at Busch Gardens Williamsburg, in Virginia, and returned to the ensemble after earning a double degree in performance and education.

“When I first played there, I played in a German polka band,” he recalled. “We were on stage in costumes, which prepared me for what I did in Kiss Me, Kate.”

He also credits his training at IC for giving him the ability to play all types of music, from classical to big band. “My mind was very much expanded musically at IC,” he said. “I loved that we were introduced to a variety of styles, and I’m glad that I wasn’t discouraged from exploring.”

After earning a master’s degree in clarinet performance at the Mannes College of Music, Thymius toured with musical productions for eight years before he started substituting in pit orchestras in New York. Since playing in Miss Saigon in 1998, he has performed in 25 shows on Broadway and on tour.

As the final curtain call for Kiss Me, Kate arrived in June, Thymius had two gigs lined up: as a substitute at Frozen in New York and with the tour of Charlie and the Chocolate Factory. He didn’t know when his next full-time job on Broadway would be, but he wasn’t worried.

“I tend to live in the present,” he said. “I don’t really plan very well, and that has served me well. When I used to go back to Ithaca College and talk to the students, I would say, ‘Practice and find your voice, and your talent and temperament will tell you where to go.’” 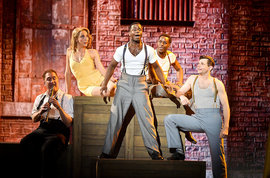