A short time ago in this very galaxy, IC associate professor of writing Jack Wang sat hunched over hundreds of pieces of fabric. The material was eventually shaped into the central characters of Star Wars Epic Yarns, Wang’s latest book series that tells the stories of A New Hope, The Empire Strikes Back, and Return of the Jedi in a new way. Luke, Leia, Vader, Yoda, R2D2, and C3PO all make appearances in these 12-word, 12-image retellings of the original Star Wars movie trilogy.

To create the figures for the illustrations in their book series, Wang and his brother taught themselves needle felting, a process where loose wool is repeatedly pierced with a barbed needle to tangle and compact the fibers and eventually make the wool firm enough to permanently hold a shape.

Star Wars Epic Yarns Behind the Scenes on Disney Video


The Star Wars Epic Yarns series comes on the heels of Wang and his brother’s felt adaptations of literary masterpieces in a series called Cozy Classics, which introduces great literature to children. When a publishing director at Chronicle Books asked the brothers what other ideas they had for abridging classics, they welcomed the chance to step into another genre.

“Movies can be classic, too,” he says, “and we’ve always been Star Wars fans, so that was the first thing we proposed.”

In reconstructing the most iconic scenes from the film, they got creative. “We used dry ice to recreate the mist on Dagobah and oxidizing paint to recreate the rusty walls of the garbage compactor.”

They cut no corners in constructing every aspect of the images. “Except for the light sabers and the force lighting, everything was shot without digital effects. George Lucas might like his CGI, but we did things the old fashioned way.”

The books came out on March 15, and now the felt is with us.

• Read about more books, music, and video created by the talented IC Community 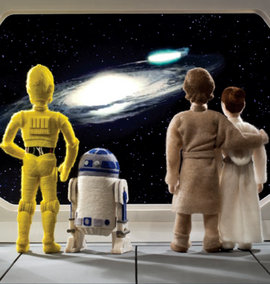