After serving for nearly three decades in the Division of Student Affairs and Campus Life at IC, vice president Brian McAree retired on August 23.

McAree joined the College in 1983 as director of residential life and was named assistant vice president for student affairs and campus life in 1989. He has served as vice president since 2000, overseeing a comprehensive student services division that includes over a dozen departments and programs, ranging from career services and athletics to public safety and the health center.

“Brian McAree exemplifies the student-centered ethos that is at the heart of the Ithaca College mission,” said President Thomas R. Rochon. “Though he must step back at this time from the demanding job he has performed with distinction for the past dozen years, I know Brian’s heart will always be with IC and its students.” (See page 2 for more.)

“During his tenure with the Division of Student Affairs and Campus Life, a number of graduates have gone on to enter the student affairs profession at colleges and universities across the country—a testament to the high caliber of leadership and mentorship provided by Brian and his team,” said President Emeritus Peggy R. Williams, who appointed him to the vice president’s position. “He leaves big shoes to fill—in terms of his work ethic, his fine character, and his engaging spirit and sense of humor.”

Read a story about alumni in student affairs. 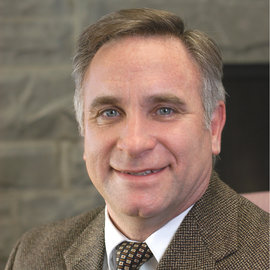