Learning how each person can act to save the planet. by Chelsea Theis '08

Phil Byers ’08 knows his bottled water. And now he knows that only one in seven of the plastic bottles in which it’s sold are recycled in the United States, and that 840 bottles are wasted every 30 seconds.

Byers, a chemistry major, was one of the attendees of Ithaca’s Sustainability Day, an annual celebration and showcase of all the work the IC community is undertaking to advance sustainability in teaching, operations, and communication. The first challenge he took part in was a water taste test, in which participants sampled three kinds of water in unmarked containers. Byers chose a product that is marketed as “spring” water as his favorite; he learned that it was actually just bottled tap water. While Byers already tries to eliminate waste by carrying his own reusable mug, he said the display was a great way to show how unnecessary it is in most parts of the country to buy bottled water.

The event also showcased displays by 20 different on- and off-campus organizations, as well as prospective study abroad programs and examples of how sustainability is incorporated into coursework in various fields. Sarah Cox ’10, an environmental science major and chair of the Student Government Association’s Sustainability Committee, ran an interactive table promoting recycling. “Anyone walking through here,” she said, “is going to be impressed and informed.”

Jeff Scott, director of dining services, gave a presentation showing recent initiatives in the dining halls such as composting, biodegradable packaging, and sustainable menus (see ICView 2007/2). The event included a “joint meet-’n’-greet” for Ithaca and Cornell students working on sustainable projects. It was also a meeting for the IC contingent who planned to attend PowerShift 2007, a convention in Washington, D.C., to change the climate on global warming in the United States; dozens traveled to the nation’s capital for the early-November summit.

Zach Avshalomov ’09, who helped run the water-testing table, says, “People take [bottled water and other packaged goods] for granted because they’re a convenience. I hope they learn to make a lifestyle choice and make a change in the world.” 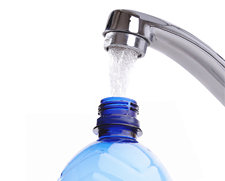