A glimpse at freshman enrollment and the class of 2014.     By Eric Maguire

“So, how is the class coming in?” It’s a question I receive quite a bit just before the May 1 decision deadline for admitted students, and rightly so. Freshman enrollment is a topic of interest at any tuition-driven college or university, and Ithaca is no exception. However, as I joined the Ithaca community last summer as vice president for enrollment management, I couldn’t help but notice the unique glare of that spotlight.

In its recent past, Ithaca College has sought incoming classes of roughly 1,600 students. In response to a large freshman class for fall 2007 (1,770 students), the College increased selectivity and subsequently fell short of enrollment targets in fall 2008 (1,441 students). This was cause for concern, as tuition revenue represents the majority of the College’s operating budget. The College countered by admitting more students for fall 2009 and responded to the economic meltdown by making more financial aid available to students. The combined effect was an incoming class of 2,027 that exceeded all expectations.

Undoubtedly, enrollment management is an inexact science, built as it is on the consistency, reliability, and predictability of decisions made by 18-year-olds. (As a former 18-year-old, I mean no disrespect.) That is to say, there will always be some level of variability and uncertainty. But the recent volatility in class size meant the College had little stomach for significant overenrollment or underenrollment. Too few students would reduce tuition revenue within the context of an already difficult national economic backdrop, while too many would only add to the challenges of overextended housing.

So, how did the class come in? I am pleased to report that the incoming class of 2014 is relatively close to this year’s target of 1,650 first-year students. As of mid-May, the College has received 1,721 enrollment deposits. Since a portion of these students will inevitably change their minds over the summer, we anticipate our final class size to be right around 1,600. This difference of 50 or so students from our target should help reduce the pressure on residential spaces while still meeting net tuition revenue goals.

Furthermore, this good fortune arrives alongside other positive milestones. Once the incoming class is officially tabulated in early October, we anticipate a 10-point increase in average SAT score relative to last year and a slight increase in our ALANA student population, making it the most diverse class in the College’s history. Again, these projections are subject to change based upon our summer “melt,” but they represent probable and positive gains for the College.

I truly hope I don’t sound self-serving in relaying those results. In fact, I deserve little credit for the outcome. As I transitioned to the College this year, I did more listening than lecturing and more learning than leading. So, please indulge me as I take this opportunity to thank my colleagues in Admission and Student Financial Services, as well as all of those within the IC family who contributed to our recruitment and enrollment efforts. Indeed, it takes a village.

I also hope that this message of enrollment success does not arrive as a false sense of security. Moving forward, the pace of demographic decline among our college-bound student population is predicted to become even more pronounced. We need to rely on alumni and friends of the College to share their stories of opportunity and success that grew from an Ithaca College education. We must also share in the growing national discussion regarding college affordability. This may or may not come as a surprise, but Ithaca College cannot meet the full demonstrated financial need of all admitted students. As a community of educators and educated professionals, we must lend our creativity and generosity to ensure that future generations have access to the opportunities that so many of us enjoyed. I hope you will join in both the conversation and the solution. 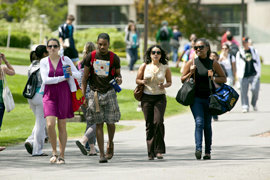 “We anticipate our final class size to be right around 1,600. This . . . should help reduce the pressure on residential spaces while still meeting net tuition revenue goals.”