What’s the College plan, and how can we all fight global warming? by Julissa Treviño ’10 with reporting by Erin McKigney ’09

IC took part in the National Teach-In on Global Warming in February, near the start of the first 100 days of the Obama administration, as one of more than 500 participating institutions.

“Students could learn about what Ithaca College is doing to reach carbon neutrality and its plan for energy conservation,” says Susan Swensen, associate professor and chair of the biology department, who lectured at the teach-in about the work of the IC Presidents Climate Commitment Committee (PCCC).

Swensen has been on the committee since its formation following the September 2007 charter signing by President Peggy R. Williams to the American College and University Presidents Climate Commitment (ACUPCC), and she’s been working on the Climate Action Plan since then.

The ACUPCC, which Swensen discussed in her talk, is a collaborative effort to address global warming by raising awareness of the dangers of greenhouse gas (GHG) emissions and encouraging institutional commitments to neutralize them.

Swensen’s was one of six presentations and lectures during the daylong event. Others ranged in focus from international business to global warming to social justice. Lecturers included IC professors, local activists, and Selwin Hart, first secretary of the Permanent Mission of Barbados to the United Nations. The concluding event of the teach-in was a screening of The Carbon Connection, a documentary that examines the implications of carbon trading.

Jennifer Hicks ’12, an exploratory student, attended Swensen’s talk, “Ithaca College’s Plan to Achieve Carbon Neutrality,” for credit in her biology class. She was impressed by IC’s efforts to be a “green” campus. “I didn’t know [Ithaca College] was involved in the PCCC, and I didn’t know all the steps they had to take to be a part of that,” she says. “It shows how much effort they’re putting into it. It’s passing on good values.”

Marian Brown, M.S. ’95, special assistant to the provost, helped organize the teach-in and says it was organized to look at climate change from different perspective, from campus policies to the local to the regional to the national. “It’s important,” Brown says, “to think about the larger impacts of what we are doing, not just what Ithaca College is doing or what I as an individual can do, but also how we collectively can work together and the larger issues related to that.”

Assistant professor of biology Nancy Jacobson, who attended some sessions, hopes students realize how important climate change is. “This is their future,” she points out. “It’s important for them to be exposed to climate change issues.”

In the day’s Sustainability Café, an ongoing series at Ithaca College, Scott Perez, a regional activist and lecturer in indigenous and environmental studies at Wells College, spoke about sustainability in relation to social justice, through the lenses of social class, race, income, and urban planning.

“Why is it more difficult for the poor to live sustainability?” he asked the audience.

It costs more to be sustainable, he answered, and people tend to look more at short-term economic gain than at long-term benefits. Other obstacles to sustainability, he pointed out, are a business-oriented Supreme Court, the power of big oil and coal, and the power of corporations in general. Still, he said, “every single one of you in this room can do something,” encouraging people to get involved with organizations, politics, and business. “We are obviously entering a time of serious environment and climate issues,” says environmental studies major Rachel Roscoe ’09, who went to the climate change conference in Poznań last semester. “And if we don’t change our ways and get off carbon-based fuels, we are doomed…It’s important that students everywhere get involved in this. It’s our generation’s problem — it’s not just for environmentalists and tree huggers, it’s for everybody.”

Swensen hopes that more students picked up on that message. “Maybe the best piece of information that students can come away from this with,” she says, “is an understanding that their behavior at Ithaca College and beyond Ithaca College can have a large impact on how we function as a society globally and how we can reduce our consumption in the long term. It is the plan of the President’s Climate Commitment Committee to keep the campus updated as to where the College stands and how it meets its obligations for carbon neutrality.” 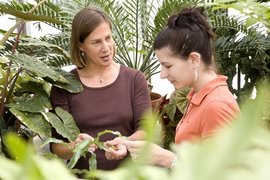