An epic poem about members of the Brentwood High School wrestling team might read a little like Homer's Odyssey. After all, Homer’s story and wrestling were born in the same part of the world, and where you come from can have a lot to do with where you’re going.

In his Odyssey, Homer describes a group of fierce warriors who leave a once proud but now smoldering city, and make their way back home to Ithaca. A series of adventures test the loyalties of the warriors.

On an odyssey of their own, the “Brentwood boys” set out to become the first in each of their families to graduate from college. After they had completed that difficult voyage toward a college degree, each reached back to help the next boy on an improbable path to Ithaca College.

In the gang-hardened but resilient hamlet of Brentwood, located in the Town of Islip in central Long Island, the word “coach” doesn’t quite convey the enormity of the job. In Brentwood, coaches often become mentors, and mentors often become fathers, and a wrestler has to try really hard to get left behind.

Brentwood coach Bob Panariello ’86 helped Carlos Restrepo ’02, who in turn coached his former teammate KC Beach ’05 as an assistant coach at IC. After returning to Brentwood, they together coached brothers Ricardo Gomez-Perez ’14 and Cristian “Alex” Gomez-Perez ’15.

The 1948 Ithaca College wrestling team. Joe Campo 49 sits in the front row, third from the left. Photo from the 1948 Cayugan yearbook

The story of Brentwood boy Joe Campo ’49 stands apart from the stories of the other boys from Brentwood for three reasons:

First, he was the first to go to Ithaca College.

Second, he was the only one who dropped out of high school, even though other Brentwood boys had reasons to.

Lastly, while all of the Brentwood boys had gone into battle metaphorically, only Campo could use the phrase literally. He left high school for Nazi-ravaged France, carrying an M2 mortar tube, the use of which often kept him within a few hundred yards of the front lines. He returned to high school a few years later and graduated.

Having enrolled at IC, former basketball star Campo found a sport that was relatively new to him—and the Ithaca campus. The college’s wrestling team had disbanded around World War II, but in 1946, an eager president Leonard B. Job reinstated the sport. A seasoned athlete and former college wrestler himself, President Job could often be found drilling with the new wrestlers, including rookie Joe Campo. Just three years later, IC’s newest athletic team finished 14th at the NCAA championships.

After graduating from Ithaca, Campo started high school wrestling programs at various schools, making his way back to Brentwood eventually, where he is known to this day as “the Gov”—the governor of Long Island wrestling and the unknowing architect of a legacy of Brentwood-to-Ithaca wrestlers.

For decades, Brentwood was an escape from New York City, literally a place to get some fresh air. In 1889, it would take city-dwellers 90 minutes to trek the 42 miles out beyond Brooklyn to where the scent of pine filled their lungs and replenished their souls. The air was once considered so cleansing that Brentwood had the largest psychiatric facility in the world, housing 13,000 patients.

After a century of people bringing their troubles to Brentwood, the resort town soon had plenty of its own. Those big-city ills that visitors had been running from were now within Brentwood's bounds. Gangs like MS-13 seduced some of the recent Salvadoran immigrants who sought safety and support. And, of course, rival gangs emerged along with crime and turf wars. No one was immune from the lure of the gangs or their random acts of violence.

Yet other residents sought community in a dramatically different way, like at the church food pantries where the Gomez-Perez family shopped for food—or at the local athletic fields.

“Brentwood is a great community once you get grouped in with good people doing something positive. If you are busy after school or going to practice, you don’t have time to wander. You have a much better chance of going to college,” said coach KC Beach ’05, a Brentwood grad. “It’s the kid who doesn’t gravitate toward an extracurricular activity who ends up hanging out after school, being unproductive and not doing right.”

Beach says a good coach can be the difference between an occasional hobby and a life-changing passion.

“You want students to be successful, so you go out of your way and do the extra things to show them you are concerned about them,” Beach said. “And then they don’t want to let you down because now they have someone in their life who cares about them, who really listens to them. Our goal is to get them to either love wrestling or love us.”

He equates it with getting someone to run a mile.

For several young wrestlers, that positive, that mythic place they wanted to run to became Ithaca College, a place they would soon describe in the same glowing terms city-dwellers had once used to describe Brentwood.

CONTINUE READING ON NEXT PAGE -> 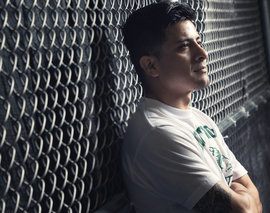 Navigating the culture, expectations, and finances of college can be tricky for any new student, but it may be especially daunting for first-generation students.

“This is an invisible form of diversity,” said Elizabeth Bleicher, director of the Exploratory Program, and it’s a designation that cuts across race, ethnicity, nationality, and regionalism. Bleicher is part of a working group of faculty and staff that met last fall to bolster the resources and support for IC’s first-generation students. The group spawned a new student organization for first-gens, which registered with the Office of Student Engagement and Multicultural Affairs in August.

The work group is also planning a seminar for first-gens that will help them adapt to and understand the expectations and culture of the college classroom, as well as programming that will encourage first-gen students to study abroad. The work group is also exploring a summer bridge program for incoming first-gens to familiarize them with the campus environment, available resources, academics, and service opportunities.

Financial literacy is also a need many first-gen students identify. Many are able to take advantage of grant money through programs such as the New York State Higher Education Opportunity Program (HEOP) and Ithaca Opportunity Grants, offered through IC’s Office of Student Financial Services. But neither resource is targeted at them specifically.

“One of the main resources that we provide to students is a lot of individual appointments to help with some very complicated financial situations and to look at creative solutions,” said Julie Hickman-Godoy, the associate director for financial aid.

A benefit of that personalized attention is knowing how to get to the heart of the matter quickly, especially for families treading in unfamiliar territory.

“We, as a staff, are very aware when the question a family is asking might not really be the question they're looking for an answer to. We’re really good at trying to focus conversations where they need to be,” she said.