The Value of an IC Education

This fall the media was abuzz with articles questioning the value of higher education:

The Economist wrote of “the college cost calamity.”

The New York Times highlighted those “saying no to college,” and a cover story in Time magazine talked about “reinventing college.”

Where does Ithaca College figure into this conversation?

Greater concern about affordability, an increasing price tag, and additional competition from online offerings has helped to create a challenging environment for the college. The declining number of college-bound students in the Northeast has also contributed to the challenge.

But Ithaca College is working proactively to combat the issues that are within its control. The college is going through a process of self-examination, focusing on what makes the college great and identifying areas that can be further strengthened. The goal is to increase the value of an IC education.

“For decades, IC has been a reputable­—and highly sought-after—option for students despite being two to three times as expensive as a SUNY school for a New York resident,” says President Tom Rochon. “But if we continue to add to quality by increasing cost well beyond the rate of inflation, talented students who would benefit from the IC experience can’t and won’t come here, and the value of our institution will decline. To maintain that value, we are challenged to increase the quality of an IC education while substantially reining in the growth of our costs.”

In other words: Value = quality/cost.

Ithaca College is not alone: Tuition for private, nonprofit colleges has risen 31 percent in the last 10 years. The average increase for 2012–13 was 4.2 percent at private colleges and 4.8 percent at public universities, according to the College Board.

Ithaca College increased its tuition rate by 4.7 percent for the 2012–13 school year, bringing the total cost of tuition, fees, room, and board above $50,000 for the first time. According to the Chronicle of Higher Education, 150 other colleges also charge more than $50,000, up from 123 a year ago.

In four blog posts this winter, Rochon wrote about the college’s plan to manage costs. He says, “There are two general strategies for cost control. One is an across-the-board belt tightening that freezes salaries and keeps all budgets flat. That’s a reasonable response to weathering a temporary economic crisis, but our challenge is to change a cost spiral that has gone on for decades. Our charge is not to reduce our rate of tuition increase for one year but on an ongoing basis. To do that, we are embarking on a targeted cost-reduction strategy.”

The first step in that strategy, according to the president, will be implementing some of the recommendations made by the Huron Consulting Group in the Effectiveness and Affordability Review it conducted last fall.

Read more about the Effectiveness and Affordability Review.

While IC is attempting to decrease costs, it must also increase quality.

“Increasing quality is a more complex task than decreasing cost,” says Rochon. “Everyone knows that less expensive is better than more expensive, but there are differences of opinion as to what quality means in a college education.”

“No set of metrics is going to be able to settle whether or not an Ithaca College education is worth the cost,” says economics professor Elia Kacapyr. “Students looking to maximize their lifetime earnings relative to their tuition expenditures don’t realize that the big payoff from a college education is not monetary.”

The outcomes of an IC education are more than just a job and a paycheck. An IC education should help students achieve a full, happy, and rewarding life, and encourage them to be lifelong learners, sharing in the responsibilities of citizenship and service in the global community. The college’s educational mission is to provide a foundation for lifelong learning following three principles: “that knowledge is acquired through discipline, competence is established when knowledge is tempered by experience, and character is developed when competence is exercised for the benefit of others.”

This mission was taken into consideration in the formation of IC 20/20, the strategic plan that aims to prepare students to be visionary leaders, ready to tackle the full range of professional and life challenges that they will face in the future—even challenges that we can’t yet imagine.

The plan includes the creation of an integrative core curriculum that will go into effect in fall 2013. This core curriculum will enable students to choose a theme with real-world importance that will then be woven throughout their general education courses in the arts, humanities, and sciences. Increased residential life programming, global educational experiences, and civic engagement are also prongs of the plan. Other initiatives include the establishment of an academic advising center and a student-alumni mentor program.

This spring marks the one-year anniversary of the ICNYC program, another initiative of IC 20/20. Participation has grown to more than 50 students this spring, and next year the School of Music will launch a music immersion program and a sound recording technology program as part of ICNYC.

“Our students, faculty, staff, and alumni have made the ICNYC program a tremendous success during the past year, and we look forward to continuing to see Ithaca College students live, study, and intern in one of the most dynamic cities in the world,” says Provost Marisa Kelly.

“In the decade ahead, the success of IC 20/20 will position the college as a leader among educational institutions,” Rochon says. “This prominence will allow us to sustain our enrollment in the face of the sharp and prolonged demographic decline facing institutions across the country but especially in the Northeast.”

“The tuition increases in the last decades were neither wrong nor wasteful because we were responding to student demand for small classes and low faculty-to-student ratios, the best academic and recreational facilities, programs for student services and support, and added faculty and staff to support those programs,” says Rochon. “But those accomplishments are no longer enough when an increasing proportion of the college-aged population can no longer afford to attend IC.”

Despite our efforts, though, the Ithaca College experience will never be inexpensive. Few things of value are. The tension between value, quality, and cost is reflected in a 2011 Pew Research Center survey of a nationally representative sample of 2,142 adults ages 18 and older. Fifty-seven percent of those surveyed said higher education did not provide good value for the money, and 75 percent said college was too expensive. Yet in that same survey, 94 percent of parents said they expect their children to go to college, and 86 percent of college graduates believe their education was a good investment.

“What those results say to me is that consumers believe higher education is in terrible straits, but they want it regardless,” says Rochon. “The survey results, taken together, say that people think a college education was great for them, and essential for their children, and yet has become unaffordable. This conundrum provokes anxiety and even anger. If it comes to the point where we can’t offer the Ithaca College experience to talented students from all economic backgrounds, we will have failed to be the kind of institution we have been and always aspired to be, and failing is something we do not intend to do.”

Read more about some of the IC students and alumni who are on the front lines of this story: 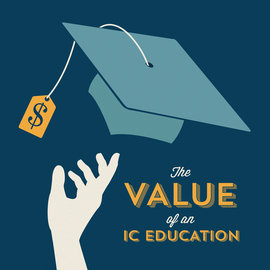 96% of revenue comes from tuition and student spending on campus*

4% of revenue comes from philanthropy, including income from the endowment and outright giving

*This figure includes tuition and fees, as well as auxiliary services such as room and board, dining services, and bookstore sales.