It was peak season for watching autumn leaves in upstate New York. But on October 13, 2006, a freak snowstorm blanketed the Buffalo area with nearly two feet of snow. The still-leafy trees were particularly affected as wet snow snapped limbs and heavy winds toppled hefty trunks. The trees problem was compounded in the following days by power companies and FEMA as they pruned rigorously, struggling to get the power back on for more than 341,000 homes and businesses.

In the next few weeks, many hundreds of felled trees were being hauled away to be used for firewood. But Therese Forton-Barnes ’85 had other plans.

Having seen tree-trunk carvings at a friend’s home, Therese, who majored in planned studies at IC and now owns a special event planning business—Events to a Tee—hatched a plan to put Buffalo’s downed trees to good use. With the help of chainsaw artist Rick Pratt, Therese began collecting suitable trunks to carve into sculptures, which would be sponsored by local businesses. Via her Carvings for a Cause campaign, these sculptures would then be placed throughout the storm-damaged area.

“I was trying to do something positive [in the aftermath] of the storm,” Therese explains. Not only would the ancient trees be salvaged, but the sculptures would enhance the beauty of the greater Buffalo area. And the proceeds would go towards Re-Tree Western New York, an organization dedicated to reforesting public areas devastated after the October snowstorm.

Eventually the organization hopes to complete 80 sculptures of important historical figures and symbols. Four have been completed to date, including one of Frederick Olmsted (designer of Buffalo’s parkway system) and one of Frank Lloyd Wright. The first finished, not surprisingly, was a buffalo.

Sponsors will be able to suggest future carvings and will have some say in where the sculptures are placed. Plaques on each will display information about the carving and its sponsor.

A similar project done in Truro, Nova Scotia, in 1999 is serving as a model. Its Buffalo counterpart is following its lead by setting up an endowment for future sculpture maintenance.

Therese hopes to have an unveiling ceremony later this year. “I want to bring in 10 chainsaw artists and have a ‘chainsaw-off’ event,” she says. “These sculptures would then be auctioned off at a fundraiser that night.”

The full project will be rolled out gradually, as sponsors are found, locations determined, and carvings completed. Ultimately, Carvings for a Cause is hoped to bring in more than $100,000 for Re-Tree WNY. 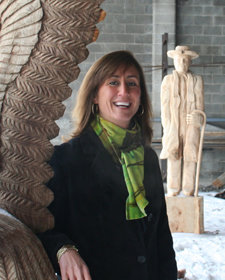 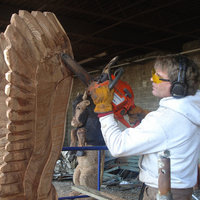 Therese with carvings of Frank Lloyd Wright; with Frederick Law Olmsted carving; the first carving, a buffalo; chainsaw artist Rick Pratt at work on the details of the bald eagle.