Losing her job turned out to be a good thing for Ebony Blue ’07.

Sometimes, getting your dream job requires that you take time to dream. This was certainly the case for Ebony Blue ’07, a ceaselessly driven financial analyst who was laid off from her job at Citigroup in 2008, just two years after starting at the firm.

“I felt lost because I had been hurdled into this world since I can remember,” she says.

Ebony had been planning her career in banking since freshman year at Ithaca College. She took the first steps toward this goal by joining, and eventually serving as president of, the African-Latino Society on campus; acting as a senator of the Student Government Association; and becoming a member of Management Leadership for Tomorrow (MLT), a national nonprofit program that supports minorities interested in business careers.

The job at Citigroup “was supposed to be the springboard that was going to take me to my next step,” explains Ebony. “When I realized that this wasn’t going to work out the way I had planned, it really took my world for a spin.”

Faced with these unexpected challenges, Ebony devoted herself to finding a job that would suit her even better than the one at Citigroup.

“I had a goal, and my goal was to be employed again,” she says. “But I didn’t automatically go to Facebook. For me it was more or less like let me touch base with the 100 people in my core network and give them my resume. Then they would send my resume off to their firms, and then it kind of goes from there.” What she found was that in a very short period of time her initial pool of 100 contacts mushroomed to 1,000.

In addition, she spent about five hours a day job hunting. “It was a focus thing,” she says, “like mental gymnastics. You just sit there and do it — every day, every day. I think a lot of people assume that you have to be motivated the whole time. But there were a lot of bumps. Sometimes I felt discouraged. Sometimes it would get taxing. But once you learn how to multitask, you can get everything you need to get done.”

Even with this kind of focus, Ebony admits how much she benefited from her time out of work.

“I got all the things that I needed to get done in terms of self-development: getting to know more people, getting more active in my community — things I couldn’t do while I was working,” she says. She traveled to Ireland, Hawaii, and up and down the East Coast. She did consulting work with a startup in New Jersey, helped a friend develop his business, and took a GMAT course. “It gave me time to figure out what I really wanted.”

That paid off professionally. By conducting countless informational interviews, Ebony learned more about investment banking/private equity, a field where she says “you are pushed to your limit and learn a lot.” She thought she’d like it.

After six months and hundreds of job applications, Ebony saw an online posting for an investment banking position at Ipreo. She knew this was the job for her and instantly employed her powers of creative networking. Tapping her MLT contacts, she was eventually referred to someone at the firm. After sending her resume to the contact, who, in turn, sent it on to Ipreo’s HR office, she successfully landed an interview.

“They called me back within another day and told me I got the job,” she says. She attributes her rapid success, in part, to “nurturing her network” because, as she says with the insight of a banker, “your network is your net worth.” As her months of unemployment blossomed into the perfect job, Ebony realized something else.

“You really need to experience the ups and the downs in order to appreciate what you get in the end,” she says. “Getting laid off opened the door for me to find the job I wanted.” 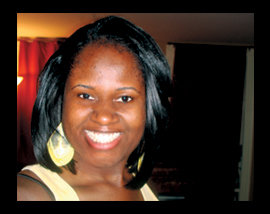