Megan Tetrick '03 on Ukraine after the Soviets

Three years with the Peace Corps leave an alumna with insight, frustration, and hope.  by Megan Tetrick ’03

Three winters ago I was a Peace Corps volunteer living in a small town in Ukraine, witnessing something I’d never expected to see — a revolution. Hundreds of thousands of Ukrainians had taken to the streets across the country to protest the fraudulent results of the presidential election in what became known as the Orange Revolution. That vibrant color brought a surge of energy to the dreary landscape, revitalizing a country still lumbering along in the aftermath of the Soviet Union’s collapse. Ukrainians ventured out of the shells they had built around themselves after decades of turmoil, repression, and terror to camp out in the cold, snowy square of the capital and demand change.

I was a year into what became a three-year stint as a volunteer when the Orange Revolution erupted. I was shocked, like everyone, but perhaps more naïve than my Ukrainian friends. I imagined that many of the frustrating problems of daily life — from the lack of hot water, steady heat, and electricity to the apathy that met all my project proposals — would suddenly be addressed. Ukrainians had stood up for democracy, so they were over communism and the legacy of the Soviets, right?

But the imprints of a heavy-handed ideology linger long. Witness racism in the United States: almost 150 years after the eradication of slavery, the idea that people of color are inferior has yet to be abolished. And so while the enthusiasm for communism as an ideal has dwindled to a whimper heard mostly from village babushkas, the attitudes and defenses built up during Soviet times are still very evident.

Going shopping, for example, was a chore I dreaded. In many stores the items are behind a counter, and you have to ask for what you want. At first, when I barely spoke the language, I was yelled at or ignored by the saleswomen. I thought my shopping experience would improve as my language skills did, but the locals got the same rude treatment. In Soviet times there was no incentive for good service because all the enterprises were state-owned. Whatever profits they made were siphoned into the state budget and pumped back into the economy according to the whim of the central planners. Today’s businesses make and keep profits (what’s left after paying absurdly high taxes and giving the local mafia their dues), but the customer is never right.

That same indifference reaches further into society, cramping the nascent efforts of nongovernmental organizations that are trying to improve social conditions. Now, when the community can finally band together to lobby the government for various needs, few will stick out their neck for anybody else. Given the brutal repression of dissidents in the past, it’s easy to understand. My host grandmother told me about how a crazy lady’s false tattle-tales on neighbors during Stalin’s purges in the 1930s precipitated their disappearance.

But that was more than 70 years ago. What are people still afraid of? It is hard for Americans to understand the long-lasting effects of having an entire intelligentsia wiped out. All the great thinkers, writers, and critics were killed or sent to freeze in the gulags. Members of the succeeding generation had no mentors, no freedom even to philosophize over tea. That loss of a generation can be felt still in the arts scene, where books, movies, and music in Ukrainian—a language different from Russian, the “language of the oppressors”—are few and far between.

Community groups that should work to protect citizens’ interests are further burdened by disillusionment with communist ideology. The word “volunteer” in Ukrainian has an entirely different connotation than in the West, thanks to the Soviet legacy of subotniki: on Saturdays “volunteers” were forced to clean up the streets and paint playgrounds. When I introduced myself as a volunteer from the United States, many Ukrainians were bewildered—why on earth would I leave such a great country to teach their children English? Concepts of community action and responsibility ring hollow: these were ideas of the socialist revolution. What had it gotten them? Nothing.

The disillusionment of the Cold War generation has been passed on, as my students often made clear. Yet there is hope, for many people I know were inspired by the Orange Revolution and believe that Ukraine can free itself from the past. The legacy of the Soviet Union, however, clearly did not disappear in a massive wave of colorful protest. That will take a few more generations.

Megan Tetrick returned from Ukraine in July 2006 and is finishing a master's degree in international affairs at Columbia University. She will join the U.S. Foreign Service in fall 2008. 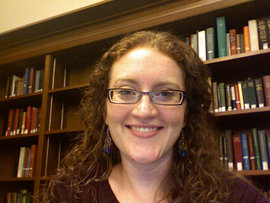