A Campus Tipping Point and an Opportunity for Understanding Together

Editor's note: This article was originally published online on May 16, 2016.

Dr. Martin Luther King Jr. concludes his last book, Where Do We Go from Here: Chaos or Community? with these words:

“We are now faced with the fact that tomorrow is today. We are confronted with the fierce urgency of now.”

Last fall, as protests gained momentum at Ithaca College, students brought light, as King once did, to the unfulfilled American promise, the difference between intention and action, and the distance between potential and reality. In drawing sustained attention to institutional inequality and the lack of campus diversity, students pushed these issues to the foreground, fostering a sense of urgency as they called for substantive change.

College officials say they hear the call while acknowledging that hearing is only a first step—perhaps the easiest step. Before considering “where do we go from here,” we need to examine how we got to where we are today. “It’s important that people understand the history as it relates to present-day reality,” says Dr. Roger Richardson, interim chief diversity officer at the college.

HOW DID WE GET HERE?

The issues at IC are more complex and long established than they may have appeared in media accounts of the happenings on campus last fall. To be sure, the factors that led to those moments defy easy summation.

“The causes are longstanding,” notes Belisa Gonzalez, associate professor of sociology and director of IC’s Center for the Study of Culture, Race, and Ethnicity. “Lots of folks see what happened around the country last year and think that there are these spontaneous protests. As a social scientist, I have to say that these are larger patterns of unrest. What happened last semester was an apex of a movement that I have been watching grow the past five years—nationally, but also at Ithaca.”

Tom Rochon, IC president, agrees. “This did not happen overnight,” he says of the issues that came to a head in the fall. He adds that in 2008, when he began his presidency, the college’s focus on diversity centered primarily on improving data-based measures of diversity in the campus population and far less on building a culture of inclusion, where people of all races and ethnicities could feel welcome and a part of the community. 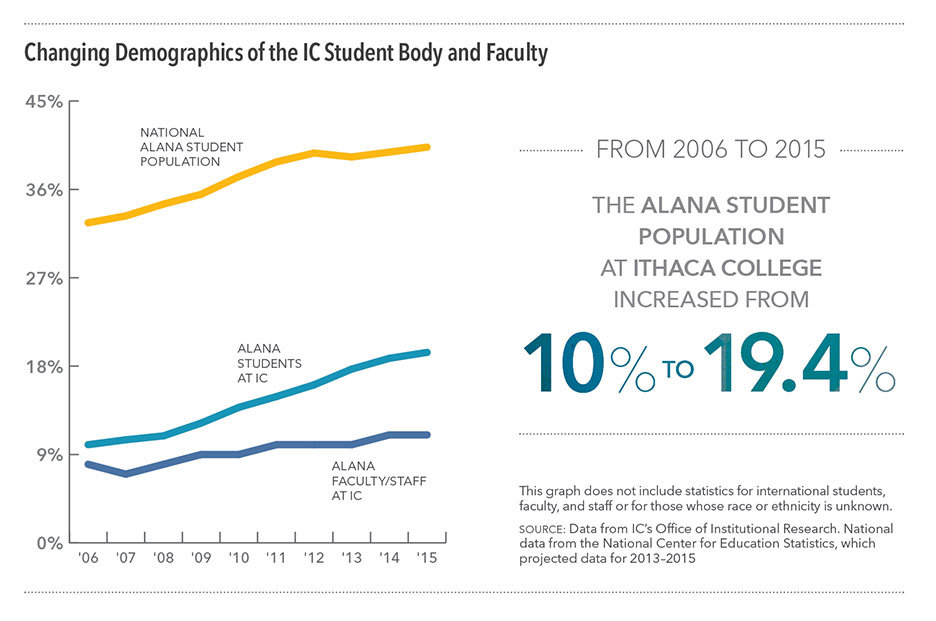 Many of those interviewed for this article mentioned the necessity of having enough ALANA faculty members to mentor ALANA students. Gonzalez notes that recruitment and retention of ALANA faculty is vital.

In 2009, a newly formed Diversity Strategic Planning Committee composed of faculty, staff, and students was charged with developing a strategic plan and an official diversity statement that would guide the institution’s diversity efforts through 2015. The committee met biweekly throughout the 2009–10 academic year and submitted a final plan to President Rochon that outlined several recommendations. The following year, the plan’s recommendations were incorporated into the college’s IC 20/20 strategic vision.

The college made progress in some of the plan’s key priorities: to increase the percentage of ALANA students each year by 1 percent, develop new residential life programming for ALANA students, add a diversity requirement to the integrative core curriculum and create additional professional development programs for faculty and staff. Beginning in 2010, the college brought in nationally renowned speakers on diversity for its Engaging Communities events.

Despite these efforts, the climate remained difficult for IC’s ALANA students: In 2011, a group of students led by Joyti Jiandani ’11 conducted research on race-related experiences of ALANA students at Ithaca College. They presented their findings at the National Conference on Undergraduate Research, which was held on campus that spring. The report indicated that while the number of ALANA students had risen, the campus remained racially divided. Further, students reported that their professors did not address issues of race and ethnicity in the classroom, and that they as students were often expected to educate others on the experiences of their race or ethnic group during classroom discussions. Even then, many said that when they shared experiences and perspectives related to their ethnicity, the accounts they gave were rejected by their peers.

“Diversity has sometimes been about counting people. Inclusion is about making people count.”
Steve L. Robbins
Diversity and inclusion expert

In 2012, the college started holding talking circles on race and racism, sponsored by the Diversity Awareness Committee. A campus climate survey that was administered that same year showed that ALANA students had a more negative view of race relations on campus than their white counterparts did.

Building on the national Black Lives Matter movement, in 2014 there were demonstrations on campus, and a group of students issued a list of demands, which called for an increase in faculty of color, required diversity training for all faculty and staff, and the creation of a diversity council to address institutional diversity. In response, the Council on Diversity and Inclusion was established in 2015 by then–interim provost Linda Petrosino ’77, M.S. ’78.

How Does IC Fit into the National Context? (part 3)

Bringing Alumni Together Around Inclusion

Community through Multiplicity by Namarah McCall '16

School authorities say they hear the call while recognizing that hearing is just an initial stepmaybe the most effortless stride. Before considering "what would be an ideal next step," we have to look at how we got to where we are today. 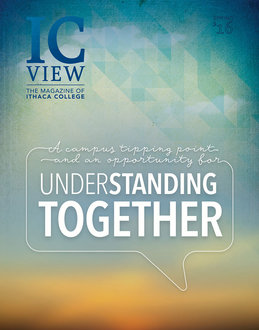 Diversity of Faculty, Staff, and Students at IC

This interactive graph provides information on the racial and ethnic diversity of the faculty, staff, and students at Ithaca College.