“VoluntEars” Carl Hansen and fellow grads help out after the California forest fires.   by Carl Hansen ’99

I looked to the mountains east of my Los Angeles apartment, and while I’m used to seeing them through the haze of smog, now they were almost entirely obscured by thick smoke. Ash was falling from the sky; a fine layer of it covered my car. The wildfires that blanketed southern California were raging, and I felt helpless.

For the first three days I was glued to the TV; the fires dominated local news. I watched homes burn and couldn’t imagine if my home were one of them.

I had no money or supplies to donate, but I did have time. I wanted to help out. But the news programs were reporting all the road closures in the affected areas, and they were telling people to stay away.

On Friday evening I received an e-mail from my friend Taralyn Frasqueri-Molina ’99, asking for volunteers to assist with a shelter visit the next morning. Taralyn works as a media engineering project manager for the Walt Disney Company and sits on the leadership council for the company’s VoluntEars, via which employees contribute their “personal time and expertise to meaningful outreach projects.”

“I have been volunteering since my time at Ithaca College,” she says. “I jumped at the chance to be a regular volunteer again when I saw [Disney] had a well-established, company-sponsored program.”

I immediately called Taralyn to commit for Saturday.

By then the fires were mostly under control, although the smell of 500,000 acres of scorched earth permeated the air. The sky was dotted with clouds — a welcome sight — and there was a chance of rain. Taralyn picked me up, and I was surprised and happy to see she’d already collected my neighbor and friend Sarah Goldberg ’00, who works as a television editor. “There was no excuse to not do it,” says Sarah. “It was really close to home.” We received matching yellow shirts emblazoned with “VoluntEars” logos, and were on our way.

We drove to the Glendale, California, warehouse where Disney keeps its donations, and met the other 12 or so volunteers. Community relations organizer Jamie Keyser, who’s been with Disney 17 years, told us the company had donated $2 million in cash and donations for people affected by the fires. Volunt-Ears have been giving community-based support around the world for 24 years; last year members donated almost 450,000 hours of service.

Pallets laden with boxes were scattered throughout the warehouse. We loaded a truck with blankets and pa-jam-as, plus candy and toys to distribute to the chil-dren at the San Bernardino County shelter. The shelter turned out to be a fairground filled with giant white Red Cross tents, thousands of boxes of supplies, and countless evacuees and aid workers. Even in person it was difficult to comprehend its magnitude.

“The air smelled of fire and port-a-potties,” Sarah remembers. “And I was surprised to hear all those pets.” (Hundreds of rescued animals were kept together in a corner tent.)

We unloaded the truck and began distributing the goods. Then Mickey Mouse, Minnie, and Chip and Dale joined us, and the effect was immediate. “The mood changed,” Taralyn says. And not just for the kids. We led the characters into the two dome shelters, where hundreds of shell-shocked people — many of whom had just lost their homes, and in some cases all their worldly possessions — sat on cots, staring aimlessly. When they caught sight of the Disney team, their faces brightened — even those of the frail and sick in the temporary infirmary. The kids played with their gifts. I introduced children to the characters, although I continually mixed up Chip and Dale (Chip has the dark brown nose). The kids loved every minute.

“I expected our visit would be somber,” says Taralyn, “but it turned out joyous. And I am happy that I got to share that with two of my close Ithaca College friends.”

It started to rain as we were leaving, but no one ran for cover. We all turned our faces to the sky. 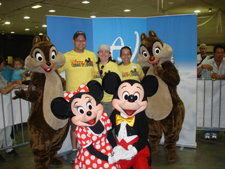