In the aftermath of the 9/11 terrorist attacks, 6,579 airline passengers found their flights diverted to and grounded for days in an unlikely place: the remote town of Gander in Newfoundland, Canada, airport code YQX.

For actors Q. Smith ’00 and Caesar Samayoa ’97, telling the real-life stories of those travelers—and the locals who hosted them—through the Tony Award–winning musical Come from Away has been the opportunity of a lifetime.

Getting to this point has been a long, multi-legged journey for the Ithaca College grads—and there’s no sign either will stop racking up the miles anytime soon.

“I started performing at church,” says Omaha native Smith. “I would do all the Easter and Christmas plays. I sang in the church choir—never soloed, I didn’t have that great of a voice—but I enjoyed it.”

Smith also performed in the community with her brother and cousin, reciting poetry written by famous African American poets and singing gospel songs. But it wasn’t until she got to high school that she discovered musical theatre.

“These two girls would sing show tunes in my choir class. They introduced me to Les Misérables, Phantom of the Opera, Miss Saigon,” Smith says. “I lived for that music. Then I went to go see Les Mis when it came through town,” she says. “I remember saying, ‘This is what I want to do for the rest of my life.’ It was my a-ha moment.”

“Ithaca was the only school that accepted me out of probably about 15 to 20 schools I auditioned for over three years,” she says. “They were the only ones, and thank God. Ithaca changed my life,” Smith says. “It’s really the people who made my experience—the professors, the students — my world really expanded. It’s a hard program, but it brought out the best of me.”

“We didn’t know much about the arts, Broadway, any of that,” he says—but they wanted him to have those experiences. A family trip to see Sandy Duncan in the Broadway revival of Peter Pan, when Samayoa was in elementary school, became a pivotal experience. “I immediately knew what I was going to do with the rest of my life,” he says. “I’ll never forget it.”

Like Smith, Samayoa says the people were the most influential part of his Ithaca experience: “My teachers really strived to introduce me and my fellow classmates to as many different techniques as possible and put everything in our hands to run with it,” he says. “My training at Ithaca set me up perfectly for the diverse and challenging—and frankly really amazing—experience of theatre that I’ve had.”

“I graduated, I got to New York, and I went to an open call for Shakespeare’s R&J, which [class of ’92] Ithaca alum Joe Calarco directed,” Samayoa says. “He cast me in the show.”

On her flight, she circled four prospective auditions in trade publication Backstage. “I slept on my friend’s couch for a few hours, woke up, and went to those auditions—and I booked all four of them,” she says.

Her pick: Smokey Joe’s Café, starring Gladys Knight. “I didn’t have a cell phone, so I had to call my parents collect and say, ‘Guess what? I just booked my first job!’” Smith says.

Smith and Samayoa say they have been fortunate to work regularly. Come from Away, naturally, stands out for both. Smith also calls out highlights including a Boston run as the understudy for Aida in the eponymous musical and productions with Transcendence Theatre Company in Sonoma, California.

Samayoa says his most memorable opportunities include Love’s Labour’s Lost for Shakespeare in the Park. “There’s something about doing Shakespeare under the stars in New York City at the Delacorte Theater for 2,000 people every night in this place that has so much history behind it,” he says. “So that’s kind of iconic for me.”

Come from Away wasn’t initially an opportunity either Samayoa or Smith—both of whom were in the city on 9/11—thought they wanted.

“I said, ‘Absolutely not. Exploring 9/11 in any shape, way, or form is too personal for me,’” Samayoa recalls. “I lost friends from school in the towers. So I turned it down, and my agent said, ‘Would you please just read the script?’ I remember sitting in my living room just rabidly reading.

Turning the last page, I called my agent and said, ‘I don’t know how I’m going to get in this show, but I need to do this show.’”

Smith was in Arkansas doing a regional production of Mary Poppins, following her Broadway run in the musical, when her agent contacted her about Come from Away. “It’s nice to get [a role] from the ground up,” Smith says. “Every actor wants that. That’s the dream, is creating a role, putting your stamp on it.”

The venue—La Jolla Playhouse in California—proved as big a draw. “If a show is going to La Jolla, there’s a good chance it’ll end up on Broadway,” she says. Neither Smith nor Samayoa knew the other had
been cast until, by happenstance, they ended up seated next to each other on the same flight to California to start rehearsals.

Smith and Samayoa stayed with Come from Away through its La Jolla run and went with the musical as it traveled to cities including Seattle, Washington, D.C., and Toronto. It opened on Broadway in February 2017.
“Q. and I happen to play the two characters who are New Yorkers,” Samayoa says. One of his characters, Kevin J., is half of a gay couple (both named Kevin). Samayoa also plays Ali, a Muslim chef ostracized by his fellow passengers. Smith plays Hannah, whose son is a New York City firefighter.

The audience reactions—not just in New York City but everywhere Come from Away has performed—have been an especially rewarding part of being involved in the show, Samayoa says. 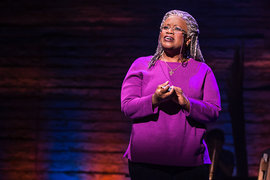 Q. Smith starred as Hannah in Come From Away. (Photo by Matthew Murphy)