← Back to “Former Presidents” 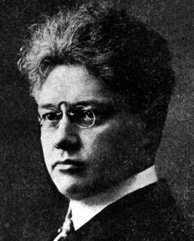 "It is my plan to build a school of music second to none in the excellence of its faculty, the soundness of its educational ideals, and the superior quality of instruction."

From this concept, Tompkins County native and accomplished violinist W. Grant Egbert founded the Ithaca Conservatory of Music in 1892. This fledgling institution would eventually grow to international prominence and evolve into Ithaca College.

As a student learning under some of the world's most renowned musicians in Europe, Egbert envisioned a conservatory to fulfill what he saw as an unmet need in the United States: in essence, he wanted his American conservatory of music to equal in service and culture the famous old-world institutions in which he had studied.

With the help of Ithaca businessman Max M. Gutstadt, a violinist who was later associated with Ithaca's Lyceum Theater, Egbert set up the conservatory in four rooms of a home in downtown Ithaca, at 403 East Seneca Street. The school opened in September 1892 with an enrollment of 125 students, eight faculty members, and two lecturers. Instruction was given in violin (headed by Egbert himself), voice (taught by his wife, Gertrude Walker Egbert), keyboard instruments, stringed instruments, history, biography, and fencing. Cornell University faculty members provided lessons in French, Italian, and German.

In 1897 Egbert amended his founding statement of the conservatory by adding "then to surround with allied schools, encouraging breadth of view and contact so often neglected by the young student." To accomplish this, he brought in George C. Williams, then the director of the Nebraska College of Oratory in Lincoln. Together, they created a new direction for the conservatory. Classrooms were established in many buildings throughout downtown Ithaca to serve as gyms, theaters, and dormitories. The institution soon offered educational opportunities in teacher training, elocution, stage work, physical education, and speech correction and improvement.

The combination of expanding the conservatory's mission and upgrading its curriculum helped the school's administration demonstrate that it was a viable educational institution. By 1926 the state's board of regents granted the charter allowing the board of trustees to change the conservatory's name to the Ithaca Conservatory and Affiliated Schools and confer bachelor's degrees in music, physical education, and oral English.

Through the years Egbert used his musical skills, knowledge, and contacts at home and abroad to attract strong administrators, like Williams, and a faculty of renowned musical experts from across the United States and Europe. Among his star-studded faculty were celebrated violinists Otakar Sevcik and Cesar Thomson. By assembling such a faculty, Egbert propelled the conservatory to a position among the foremost schools for music education. In "Ithaca Conservatory of Music Gaining World Prominence," an article written by Egbert in 1920, he boasted that eminent conductors were recruiting among his conservatory's students. He also noted that one of the conservatory's graduates had been awarded the Federated Music Clubs of America prize for the best-trained American violinist under age 30.

An added benefit for the local community was the steady supply of public, world-class musical performances by Egbert, his faculty, and students. The concerts, in turn, helped promote Ithaca as a home of cultural expression.

George Williams would be credited later with saying the hurdles of running a young conservatory "would have broken a man of less spiritual resistance." Egbert did bend but didn't break, remaining as his school's president until 1924, when he turned the reins over to Williams, his general manager. But even through this transition, Egbert continued to serve as the musical director almost to the end of his life.

Whatever his title, as founder and as leader of the Ithaca Conservatory of Music, Egbert was key to the management of the institution. Throughout his life's work with the conservatory, he taught, he studied, and he provided the visionary leadership that resulted in the institution known today as Ithaca College.