Though she formally retired in 2008—upon which time she was named president emerita and awarded an honorary doctor of letters degree—Peggy R. Williams continues to demonstrate the leadership in and commitment to the causes of higher education and women’s leadership, which were the hallmarks of her 36-year career.

Williams holds a bachelor’s degree in psychology from St. Michael’s College of the University of Toronto, master of education degree from the University of Vermont, and doctorate in administration, planning, and social policy from Harvard University. She is a citizen of both the United States and Canada, having lived in the U.S. since 1968.

She began her career as a social worker, and upon entering the field of higher education she held various faculty and administrative positions within the Vermont State Colleges system and at Trinity College in Burlington, Vermont. She was president of Lyndon State College for eight years prior to being named the seventh—and first woman—president of Ithaca College, where she served for 11 years.

Among Williams’s accomplishments at Lyndon State College were overseeing construction of Samuel Read Hall Library and Academic Center above the existing library; overseeing the addition of programs in math, liberal studies and sports medicine; and establishing the campus computer network and technology infrastructure. She also established the college’s division of institutional advancement — which enhanced student recruitment, admissions and retention initiatives — and raised enrollment to then-record levels. In 2019, she was named President Emerita at Lyndon State College.

Under her leadership at Ithaca, the establishment of the Martin Luther King Jr. Scholar Program; Center for the Study of Culture, Race, and Ethnicity; Center for LGBT Education, Outreach, and Services; and Center for Faculty Research and Development furthered the college’s commitment to diversity, interdisciplinary education, and pursuit of new approaches to teaching and research. New academic programs included master’s degrees in teaching and business administration and the doctoral program in physical therapy. The LeaderShip program was created during her tenure to enhance the overall quality of management and leadership at the college. Her support for sustainability initiatives included being a charter signatory to the American College and University Presidents’ Climate Commitment and the construction of two platinum LEED buildings—the Dorothy D. and Roy H. Park Center for Business and Sustainable Enterprise and the Peggy Ryan Williams Center. Williams led Ithaca College in its largest comprehensive campaign, raising $145 million to surpass the campaign goal by $30 million.

Her strong interest in community service helped boost student volunteerism. Williams championed the cause of community service, creating a “Day of Service” as part of her inauguration at Ithaca College that subsequently became an annual event for a number of years. She set a personal example by participating in events such as Women Swimmin’, a swim across Cayuga Lake to benefit Hospicare and Palliative Care Services, and the AIDS Ride for Life. In recognition of her contributions to volunteerism, a bench in the Ithaca Children’s Garden has been dedicated in her name.

In 2009, Williams was honored with the Donna Shavlik Award from the American Council on Education and the Catherine McAuley Award from the regional chapter of the Sisters of Mercy of the Americas. In 2017, Williams was selected as one of 25 “icons” of Ithaca College in honor of its 125th anniversary, and in 2018, Williams received the Alway Award for Alumni Achievement from St. Michael’s College of the University of Toronto.

Williams lives in Johnson, Vermont, and Fernie, British Columbia. An accomplished athlete who swims and bikes regularly, Williams also enjoys skiing, sailing, photography, and travel. She and her husband, David, are avid travelers whose idea of a “relaxing” vacation is one that finds them cycling across Europe or hiking in the eastern Canadian Arctic wilderness. 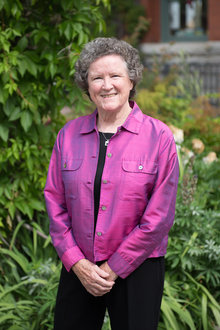 The Ithaca College experience will enable you to further develop your capacities to think critically; to appreciate diversity of background, outlook, and opinion; and to engage in intelligent, informed, and respectful discourse.