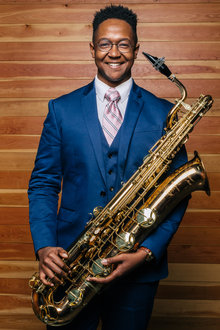 Lauded for his “glowing mahogany tone” (Seen and Heard International) and “breathtaking” (Classical Voice of NC) performances, Steven Nichols Banks is a classical saxophonist, chamber musician, music educator, advocate for diversity and inclusion in classical music, and composer. Steven currently serves as the Assistant Professor of Saxophone and Jazz Studies at the Baldwin Wallace Conservatory of Music in Berea, OH.

Steven has performed as a concerto soloist with the North Carolina Symphony, Indiana University Symphony Orchestra, Durham Symphony, and the Northwestern University Symphonic Wind Ensemble. In February 2019, he will be performing Joel Love’s Solace: A Lyric Concerto on the Stern Auditorium/Perelman Stage of Carnegie Hall with the Baldwin Wallace Conservatory Symphonic Wind Ensemble. As an orchestral saxophonist, Steven has an ongoing relationship with The Cleveland Orchestra, having performed with the legendary ensemble in Severance Hall, Carnegie Hall, and at the Blossom Music Center.

As an advocate for contemporary classical music, Steven has performed and premiered new works at the Ear Taxi New Music Festival, NUNC!2 New Music Conference, and the Northern Illinois University New Music Festival, to name a few. Most recently, Steven is leading an effort to commission Joel Thompson to write a concerto for baritone saxophone and orchestra.

Banks is the baritone saxophonist of the award-winning Kenari Quartet. They enjoy a regular schedule of touring and recording at universities and chamber music series’ around the country. The group has earned top prizes at 7 national and international chamber music competitions. Their debut album, French Saxophone Quartets, was released in December 2016 under the Naxos Records label. Kenari is represented by Jean Schreiber of Classics Alive Artists.

Banks is an advocate for diversity and inclusion in the classical music education and performance. In March 2017, Steven gave a talk at the TEDxNorthwesternU 2017 conference with ideas about how to create change in institutionalized prejudices against women and people of color.

As a jazz saxophonist and multi-instrumentalist, Steven has also performed alongside members and former members of the Jazz at Lincoln Center Orchestra, Buddy Rich Big Band, Vanguard Jazz Orchestra, among others. He has played on professionally-released recordings, including Michael Spiro and Wayne Wallace’s album, Canto America, which was nominated for a 2017 GRAMMY award.

Steven has a Master of Music degree from the Northwestern University Bienen School of Music in Saxophone Performance and a Bachelor of Arts degree in Saxophone Performance with a minor in Jazz Studies from the Indiana University Jacobs School of Music. His primary saxophone teachers have been Taimur Sullivan, Otis Murphy, Jr., and Galvin Crisp. He has studied jazz with David Baker, Pat Harbison, Jeremy Allen, Luke Gillespie, Tom Walsh, Wayne Wallace, Brent Wallarab, and Ronald Rudkin.