Dean Leslie Lewis Leads the School of Humanities and Sciences

When it was announced that Leslie Lewis would be the new dean of the School of Humanities and Sciences, Ithaca College’s provost and vice president for academic affairs, Kathleen Rountree, said in a press release, “[She] exemplifies the model of the teacher-scholar, as well as having strong administrative experience.”

Dean Lewis’s record speaks for itself, and by all accounts, she is making a very positive impression on the Ithaca College community. She came to Ithaca from the College of Saint Rose in Albany, where she served two years as dean of the school of arts and humanities. While at Saint Rose, she was also chair of the English department and director of the American studies program. Kim Middleton, associate professor of English at the College of Saint Rose, says of her former colleague, “Leslie embodies a very rare combination: she is invested in innovative and interesting ideas for their own sake, but she is also a pragmatic thinker.”

Dean Lewis received her Ph.D. in American literature from Indiana University. She also holds a master’s in English from the University of Virginia and a B.A. in liberal arts from St. Johns College. Even in her role as dean, continuing her scholarship is a real priority of hers. According to Hugh Egan, chair of IC’s English department, of which Dean Lewis is a member, “[She] is a substantial scholar of African American literary tradition and a theorist of pedagogy as well. Her 2007 book, Telling Narratives, examines how the power of secrets reconfigures the master-slave dynamic in African American narratives written by both men and women.” In fact, one of the scholarly projects that she has planned evolves out of Telling Narratives. She is hoping to continue her archival work on 19th- and early-20th-century African American newspapers and magazines. The other project she has in mind focuses on the science-fiction work of Octavia Butler. Dean Lewis says, “She interests me because of the way she works with questions of difference and power from a very extraterrestrial point of view.”

Reflecting on her first year at Ithaca College, Dean Lewis says, “It has been an amazing year with some unexpected challenges, but I have been deeply, deeply impressed by what we do as educators in the school of H&S. I am very optimistic about what the future holds.” It was her optimism, her honesty, and her openness that so many faculty and students appreciated during this challenging time. According to chair and associate professor of writing Diane McPherson, “It seems to me that she was the perfect person to guide H&S through the current budget crises; Dean Lewis did such a good job of anticipating what would need to be done. I’ve always felt well-informed and hopeful.” Associate professor of history and chair of women’s studies Vivian Bruce Conger adds, “What was really nice through all of the budget turmoil was that Dean Lewis never shut down that sense of possibility. If not for her positivity, we could have become discouraged, but she never let us feel that way. Dean Lewis sees possibility, and she has this ability to get the faculty very much involved and excited.”

It’s hard not to get excited by her vision of the school. As Dean Lewis sees it, “We are a top notch liberal arts college, and we need to recognize that. Ithaca College itself is not a liberal arts college, but the school of H&S is. We also benefit from everything the professional schools bring to campus and the additional perspectives that come from professional education. I’m very pleased with where we are in H&S.” Earlier this year, President Rochon unveiled a new strategic vision for the College, one that emphasizes integrative learning, and Dean Lewis has been instrumental in generating energy and enthusiasm in support of this vision, leading discussions and meeting with faculty and students alike. She believes that H&S is ahead of the curve in implementing this vision, as the school already offers many experiential and integrative learning opportunities for students, largely due to the dedication of the faculty: “I am very impressed with the research, scholarly, and creative agendas of our faculty,” she notes. “This is a faculty culture that’s very student centered and engaged with students at every level.” In fact, she says that this process could not move forward without the faculty; as she wrote in a piece for the Ithacan earlier this year: “Faculty wisdom and dedication to learning will inform curricular change at the College.”

But it is also important to Dean Lewis to incorporate student voices. To this end, she set up a student advisory committee to engage students and draw on their experiences at the school. Cole Lechleiter ’10, biology and chemistry major, served on the new dean’s student advisory council this year. From his perspective, “Dean Lewis stays connected. You can tell by the way that she talks to students that she wants to understand the H&S student experience—what’s great and what’s lacking. The dean’s student advisory council has already opened necessary conversations to directly address problems with really creative solutions. I think Dean Lewis has done well in her first year to create the energy to move her vision forward for a highly connected and dynamic school.”

When asked how she planned to spend the summer, Dean Lewis smiled and said that she hopes to spend lots of time in her garden. “I’m an extreme gardener. Vegetables, herbs, perennials, cut flowers—you name it.” She is also very much looking forward to quiet-water kayaking and getting to know Ithaca. 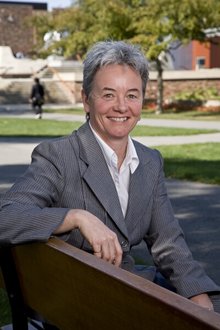