JWST/RLST 10300 Hebrew Scriptures Rebecca Lesses
MWF 1:00-1:50 PM
Themes: Identities and Mind Body Spirit. Perspective: Humanities.
The Hebrew Bible (referred to by Christians as the Old Testament) is one of the foundational books of both western and world culture, and serves as the basis for Judaism and Christianity. In this course, we will read the books of the Bible critically as literature, as religious and moral text, and as a source of sociological knowledge. This course surveys the biblical literature, acquaints the students with critical methods for the study of the Bible, situates the Bible within the literature and culture of the ancient Near East, and discusses the religion of ancient Israel. We will deal with questions of history and archaeology, and with questions of meaning - what the biblical text meant to its ancient readers, and what meaning it has today. Readings will include the Bible and A Brief Introduction to the Old Testament: A Historical and Literary Introduction to the Hebrew Scriptures, by Michael D. Coogan and Cynthia Chapman (4th edition). JWST-10300 is cross-listed with RLST 10300. A student may not earn credit for both RLST-10300 and JWST-10300. No prerequisites.

JWST 24000 Film and the Holocaust Michael Richardson
MWF 10:00-10:50 AM
This course will look at how the Holocaust has been represented in film, examining a broad range of documentary and fictional works from 1945 to the present, focusing on several key questions: To what extent have filmmakers aligned themselves with or pushed back against the notion that the Holocaust is essentially unrepresentable? What are the ethical and political dimensions of Holocaust representation? How has the form and the significance of cinematic representation of the Holocaust changed over time? 3 credits. Sophomore standing or permission of instructor.

JWST 25000 Antisemitism: Contemporary and Historical Perspectives
TR 1:50-2:25
Theme: Identities. Perspective: Humanities. Diversity.
The recent rise of antisemitism in the United States and other countries has spurred renewed attention to what has been called "the oldest hatred." This course examines antisemitism through both a contemporary and a historical lens, starting with contemporary manifestations of antisemitism in the United States and other countries, especially since the American election campaign of 2015-2016 and rising violence against Jews in both Europe and the United States. It explores the question of how to define antisemitism, traces the history of antisemitism from antiquity to the present, and returns to the present to confront the issue of how to fight antisemitism. Readings and other resources will include Antisemitism Here and Now, by Deborah Lipstadt, Antisemitism: A History, edited by Albert Lindemann and Richard Levy, films such as Gentleman's Agreement (1947) and The Believer (2001), and recent documentaries on antisemitism. 3 credits. Sophomore standing or permission of instructor.

POLT 23000 The Holocaust Don Beachler
TR 4:00-5:15
This course is an introductory survey of major issues related to the Holocaust. We will examine the role of anti-Semitism in Western Culture and the rise of the racial anti-Semitism that animated Nazi hatred of the Jews. Among the topics to be covered are: The rise of Hitler to power; the initial policies of persecution and dispossession of the Jews and Jewish responses to these policies; the evolution of Nazi policy from expulsion of the Jews to extermination; the role of Jewish community leadership in attempting to cope with a murderous onslaught by establishing Jews in vital industries; the cooperation of many German bureaucrats in the final solution; the relationship of the Holocaust to the Nazis’ overall racial views and their war of racial supremacy in eastern Europe; the ongoing controversy over whether more Jews could have been rescued by the nations opposing Hitler and his regime. 3 credits. Sophomore standing or permission of instructor.

JWST 42000 Internship: Jewish Studies Rebecca Lesses or other Jewish Studies faculty
On-site work experience, combined with academic study, in agencies or educational institutions with significant Jewish content, such as Jewish schools or community agencies or multicultural groups. Arranged individually at the student's request with the individual instructor, a sponsoring agency, and permission of the Jewish studies coordinator. 1-12 credits. Offered on demand only.

JWST 49100 Independent Study in Jewish Studies Rebecca Lesses or other Jewish Studies faculty
Special research on an individual project arranged by a student with a particular faculty member. The project may include reading books and/or writing papers under the guidance of the faculty member, with a performance expectation of upper-level work. 1-4 credits. Offered on demand only. 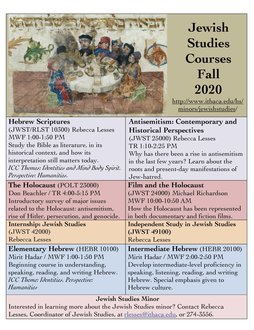 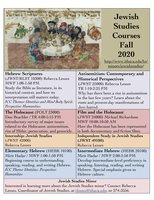