Dr. Roald Hoffmann, emeritus professor of Chemistry at Cornell University and Nobel Laureate in Chemistry (1981), will speak on October 23 at 7:30 pm in Clark Lounge.

Dr. Hoffmann was born in 1937 to a happy Jewish family in Złoczów, Poland (now Zolochiv, Ukraine). His talk will recount the story of how his family survived the Nazi attempt to exterminate the Jewish people. The personal goodness, amidst much evil, of a Ukrainian family, played an essential role in his family’s survival. Only a few Jews in Zolochiv (200 out of 4,000) survived the Nazi genocide. After some years of wandering, he and his family finally arrived in the United States. Dr. Hoffmann will speak of the complexity of Ukrainian-Jewish relations, the role in the war of the Ukrainian Greek Catholic church, and the struggle to establish memorials in Zolochiv and surroundings. His story is a personal one, embedded in the geography and history of the people cohabiting that contested piece of the earth. Ultimately it is a story of the choices for good or evil that people must make in the worst of times.

Roald Hoffmann was born in 1937 in Złoczów, Poland. Having survived the war, he came to the U. S. in 1949, and studied chemistry at Columbia and Harvard Universities (Ph.D. 1962). He has been at Cornell University since 1965 and is now the Frank H. T. Rhodes Professor of Humane Letters Emeritus. He has received many of the honors of his profession, including the 1981 Nobel Prize in Chemistry (shared with Kenichi Fukui).

Dr. Hoffmann’s lecture is sponsored by the Jewish Studies Program at Ithaca College.

For more information about Dr. Hoffmann’s lecture, please contact Rebecca Lesses, Associate Professor and Coordinator of the Jewish Studies Program at rlesses@ithaca.edu or 607-274-3556. Individuals with disabilities requiring accommodations should also contact her as soon as possible to make arrangements for attendance. 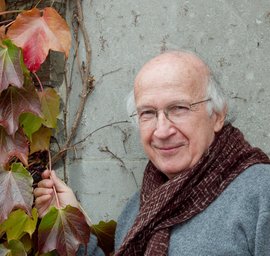