Interview with Diana Reisman, Executive Director and Co-founder of The Wharton Studio Museum 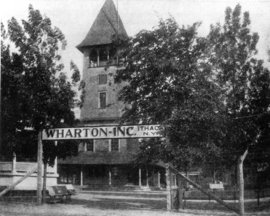 During the silent era of filmmaking in the early 20th century, the Wharton studio produced films with the most famous stars of the era, such as Lionel Barrymore and Pearl White, and developed the filmmaking process alongside filmmaking pioneers such as Thomas Edison. The Wharton’s founded the studio after Ted Wharton, the studio’s founder, filmed a football game between Cornell and Penn State. The studio existed from 1914 to 1921, and the studio building is still in Stewart Park today, used as an equipment shed. The Wharton Studio Museum has made it their mission to not only preserve the history of the studio, but to preserve the history of silent film and to turn the studio into a community site. I had a chance to talk to co-founder and executive director of the Wharton Studio Museum Diana Riesman, to find out how the museum participates in FLEFF and the importance of the project’s goals.

Diana Reisman has worked in the film and television industry for many years optioning books and developing film scripts for major studios such as The Walt Disney Company. Reisman then worked in radio, developing and producing shows for Santa Barbara based radio station KCRW. Although the Wharton Studio Museum has only been incorporated since 2009, Reisman told me her interest in the studio started much earlier. Reisman talked about learning of the studio’s existence and was surprised that a studio existed in Ithaca at that time. This interest led to Reisman researching the studio and upon learning of the studio building’s current condition, she co-founded the Ithaca Motion Picture Project, now known as the Wharton Studio Museum.

The Wharton Studio Museum has contributed numerous screenings and installation projects in and around Ithaca. Their projects include exhibits in the Tompkins County Library, the Ithaca Airport and many local businesses around Ithaca. The Museum project has successfully placed a sign at the historic studio sight but still works towards its goal of making the studio a dedicated community center and historic site. Reisman says the eventual goal of the studio is to create a trail that connects the historic film sites of upstate New York, including the George Eastman House in Rochester.

The Wharton Studio Museum has participated in FLEFF for many years, co-sponsoring silent film screenings for the festival. This year, the Museum has co-sponsored two films for the festival, Sadie Thomson starring Gloria Swanson and Wharton alum Lionel Barrymore and The Epic of Everest, a documentary film on the third attempt to climb Mount Everest.

Reisman says that the screenings of both films at FLEFF allow for discussion and dialogue about an important part of the Ithaca landscape that has often been overlooked. Hopefully that discussion leads to better treatment of our historic sites in the future.

Photo courtesy of The History Center with thanks to Wharton Studio Museum.