Posted by Gabriella LoBue at 10:28AM 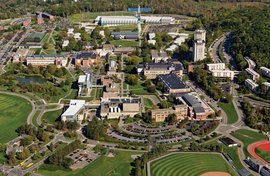 Sifting through the FLEFF film and event program can be slightly overwhelming, as there is an ample amount of events being offered in a single week. While, of course, everybody has their own personal tastes, I have compiled a list of films, all diverse in subject, that gives an idea of the many types of events that will be available on Ithaca College's campus.

1. Terra Antarctica: Rediscovering the Seventh Continent (2009). Take a ride with the filmmakers as they explore the Antarctic Peninsula by sea kayak, sailboat, foot and small plane for six weeks. This documentary takes a unique, up-close look at climate change’s impact on the icy landscape. Both local and global concerns about the rapidly changing evolution of the continent are examined. Runtime of 49 minutes.

2. Unafraid: Voices from the Crime Victims Treatment Center (2014). Hear the stories of four rape survivors and two pioneering feminists, as their experiences of trauma, resilience, and activism are shared. This documentary explores the subject of rape trauma, the obstacles victims face on the road to recovery, breaking the silence, and the revolutionary invention of the rape kit. See how the capacity of individuals to make social change is examined. Runtime of 44 minutes.

3. DNA Is Not Destiny? (2015). Studies suggest that epigenomes, a product of fetal and early childhood experiences, can change the functioning of both the body and the brain. This documentary considers the profound social and political implications of new discoveries in the field of epigenetics. It also explores the subsequent and potential consequences for behaviors in mental and physical health. DNA Is Not Destiny? is part of the mini-series, The Raising of America. Runtime of 37 minutes.

4. Queer China, ‘Comrade’ China (2009). The road to changes and developments in the Chinese LGBT culture over the past 80 years has been a long one. The transformation of queer culture being an unspeakable taboo to becoming an accepted social identity has since been reflected in law, media and education. This documentary provides a comprehensive historical account of the movement in contemporary China, and historical milestones and ongoing advocacy are examined. Runtime of 60 minutes.

5. Abrazos (2014). Embark on the unique journey of fourteen U.S. citizen children as they travel from Minnesota to Guatemala to meet their grandparents, and in some cases, their siblings, for the first time. This documentary explores the hopes, dreams and fears of these transnational families as they connect to share stories, strengthen traditions and begin to reconstruct their cultural identity. Runtime of 44 minutes.

A full list of all on-campus events can be found here.

What on campus event(s) are you most interested to see?