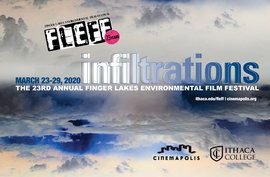 On the Ithaca College campus and downtown at Cinemapolis

Our 2020 festival theme is INFILTRATIONS, a term that refers both to environmental, health, and political issues and processes.

Attacking from behind enemy lines, infiltrations suggest guerilla tactics. They undermine, weaken, and sometimes overcome the stronger power. Infiltrations subvert all forms of dominance and open spaces for new possibilities.

Infiltrations refers to the slow passage of liquid through a filtering medium, and also the permeation of liquids into another entity through filtrations.  It refers equally to the process of water entering the ground and then the soil below.

Digital infiltrators invade our privacy, map our preferences, exploit our desires, and chart our social lives to monetize our futures.

Sustainable systems infiltrate late-stage digital capitalism with the hope of altering its systems to propel human survival and ecological benefit.