The Toby Tatum Guide to Grottoes and Groves 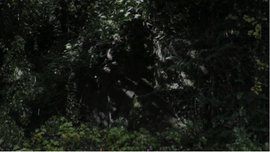 The Toby Tatum Guide to Grottoes and Groves by Toby Tatum

The Toby Tatum Guide to Grottoes and Groves

The result of “a year-long vision quest into the twisted labyrinths of the forest,” The Toby Tatum Guide to Grottoes and Groves presents psychological and emotional geographies in particular and peculiar environments near the coastal town of Hastings (United Kingdom).

The video opens with music accompanied by a black screen. Gradually, the image fades to reveal details of a shadowy woodlands. Movements are subtle and often only suggested by the play of light on the leaves of trees or the surface of water. An echoing murmur accompanies a long shot of branches and leaves blowing in the wind and shimmering under the sun. The music intensifies, vibrating loudly at the moment of a cut between two visual images.

At times, Abi Fry’s sound design evokes the songs of cetaceans, perhaps whales, swimming in the nearby English Channel. At other times, it evokes Teiji Ito’s score for Maya Deren and Alexander Hammid’s Meshes of the Afternoon (1943), a feminist critique of normative institutions from marriage to Hollywood that is remarkable for its dreamlike evocations and multilayered relationships between sound and image. Tatum, however, guides us on a very different journey, one that is appears to be devoid of the presence of terrestrial and aquatic mammals.

He guides us into places that we seldom visit. The dark images present a challenge to audiences accustomed to streaming media on their laptops and mobile and watching them in full light. In order to see the images clearly, the video prompts the audience to view the video in a darkened room, which figuratively embodies the video’s subject of grottos and groves, where stone and foliage offer a visually obscuring protection from the sun. The play of light appears to contradict a sense of spatial depth, suggesting geographies that are rarely written on film or video. Tatum describes his videos as “windows or portals to another world,” inviting audiences “to peer across the threshold” into an aspect of nature that most have not experienced. Because of accelerated global warming, the video may soon be a document to an irretrievable verdant past.