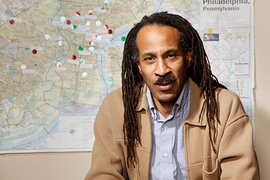 Louis Massiah is a documentary filmmaker and the founder/director of Scribe Video Center in Philadelphia. His innovative approach to documentary filmmaking and community media have earned him numerous honors, including a MacArthur Fellowship (1996-2001), two Rockefeller/Tribeca fellowships and a Pew Fellowship in the Arts. His award-winning documentaries, The Bombing of Osage Avenue (1986), W.E.B. Du Bois – A Biography in in Four Voices (1996), two films for the Eyes on the Prize II series (1987), and A is for Anarchist, B is for Brown (2002), have been broadcast on PBS and screened at festivals and museums throughout the US, Europe, and Africa. In 2011, he was commissioned to create a five channel permanent video installation for the National Park Service’s President’s House historic site. A graduate of Cornell University and Massachusetts Institute of Technology, Massiah has been a guest artist and visiting faculty member at Swarthmore College, Temple University, Princeton University, and the University of Pennsylvania.

Place, a key environmental concern, features in many of the works produced at Scribe Video Center in Philadelphia. These video documentaries define, recognize, and honor the struggle for our home communities.  Scribe’s documentaries about Philadelphia neighborhoods reveal environmental tensions between histories, identities, and places. A work of participatory community media is more than an aesthetic documentation of the past; it builds new understandings and visions of community.

Formed in 1982, Scribe Video Center provides a place where artists and scholars can work together and learn about the craft of time-based electronic media.

Scribe was part of the second wave of the independent media movement in the United States. It references organizations such as Young Filmmakers (New York), Boston Film Video Foundation, Community Media Workshop (Chicago) and media movements at progressive campuses like UCLA and Howard University, where students explored cinema’s political and emancipatory possibilities.

In the 1970s and early 1980s, video experimenters influenced the emergence of community media centers. The artists of the TV Lab at WNET, Philip and Gunilla Mallory-Jones at Ithaca Video Project, the Vasulkas at SUNY Buffalo, Connie Coleman and Alan Powell at the Experimental Television Center (Owego, New York),  and Benjamin Bergery at MIT opened this new territory.

In Philadelphia, “Scribe” has become shorthand for filmmakers, writers, visual artists, activists, journalists, electronic tinkerers, and scholars-of-the-community who come together to share knowledge about documenting and storytelling with time-based visual media. Scribe is activist in orientation and reflects Philadelphia’s multicultural demographic. The group has intentionally focused on the stories of Philadelphia’s sizable working-class African-American community.

Scribe’s early projects combined media training, technological exploration, and storytelling to look at social issues. In the 1980s, regressive governmental policies and the withdrawal of resources contributed to a critical shortage of affordable housing and increased homelessness. Movements organized by the homeless, formerly homeless, and housing advocates arose to address these problems.

As this group of media makers became known, we found ourselves supporting other late 20th century struggles, healthcare in the age of HIV, combatting violence against women, rights of adjudicated youth.   Scribe’s greatest asset was convening artists with strong media-making skills.  We were most effective sharing our knowledge of documentary storytelling with local organizations collaborating to tell their stories.

Through its Community Visions program, Scribe developed a participatory community media production model. In 1990, we sent three questions to a broad range of Philadelphia community groups:

1. Did the group/organization need a short documentary to strengthen their ability to reach their constituency?

2. Could they name individuals from their membership, staff, and constituency interested in learning the art and craft of documentary video production?

3. Could they suggest specific places where the finished video work could be seen by their constituency to become part of a civic discourse?

To review the applications, we gathered a community advisory board. In the early years we selected  social action groups: the Women’s Community Revitalization Project, an organization securing housing for low-income women; The Have-Nots, a homeless theater group; Kensington Action Now!; the Philadelphia Black Women’s Health Project; Women Organized Against Rape; and Women Against Abuse/Community Legal Services.

Averaging about 4 projects a year, Scribe has facilitated 80 productions. We also replicated the program in Jamaica and Haïti for UNICEF.

Gentrification ignited tensions. Displaced by increased real estate taxes, long-term residents felt invisible. New residents moved into these gentrified neighborhoods with no understanding of the connections between place and identity.

The Precious Places Community History project was a voice for long-term residents.  In a citywide media project organized by Scribe, they foregrounded the community memories ignored by outsiders of public spaces.  In Philadelphia, when official histories fuel economic engines and determine tax spending, reclaiming hidden histories constitutes an important community intervention that represents an expanding mosaic history of the Philadelphia region (including Camden, New Jersey, and Chester).

By 2016, 79 Precious Places documentaries have mapped the hidden histories of place in Philadelphia. They have appeared on Philadelphia public television and cable access broadcasts, neighborhood screenings, website load-ups, and festival screenings beyond Philadelphia.

In the 21st century, participatory community media introduces unofficial narratives into civic discourse. The videos’ subjects are also their authors, whose passion exposes the community’s emotional relationships to public spaces.

These films provoke questions about how communities make civic decisions.

What do we preserve? What do we demolish? Do we need tax abatements for developers of upscale housing? What is gained by development? What is lost? How do we make decisions that honor community and place-based identities, even when property deeds or titles do not exist?

Participatory community media stories engage our physical community to ground our decisions and priorities and build a foundation for civic action.