The State of "African" Cinema 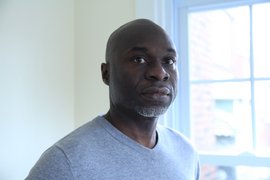 Idrissou Mora-Kpai is an independent filmmaker and producer from Benin currently residing in Pittsburgh, Pennsylvania. His socially and politically engaged documentary films include Si-Gueriki,(2003); Arlit – The Second Paris (2005); Indochina – Traces of a Mother (2011) have been screened throughout the world and have received numerous international prizes and awards.

The pioneers of African cinema envisioned their films as strong political and social engagements. Filmmakers such as Med Hondo (Mauritania), Djibril Diop Mambety (Senegal), and Ousmane Sembene (Senegal) understood that newly-independent African countries needed to fight together to overcome postcolonial economic and cultural domination. For them, cinema could correct historical misrepresentation. It could present stories from their own point of view. This first generation’s vision inspired me.

I did not discover these filmmakers during my childhood in Benin.

I encountered them as a student in Berlin in the early 1990s. During this time, the Berlin International Film Festival collaborated with the House of World Cultures to mount screenings of African films apart from the festival’s official events. A small group of significant African filmmakers such as Djibril Diop Mambety (Senegal), Soulemane Cisse (Mali), Idrissa Ouedraogo (Burkina Faso), Gaston Kabore (Burkina Faso), Ngangura Mweze (Democratic Republic of Congo), and Jean-Marie Teno (Cameroon), presented.

Africans saw this as discrimination. Many criticized these events as a ghetto, regretting that African films were not official festival selections.

For their part, programmers determined that African films lacked sufficient professionalism for inclusion in the festival proper. Yet beyond these debates, I was introduced to films different from any I had seen before. These films spoke to me.

Between this first generation of filmmakers and my generation (which includes filmmakers Jean-Pierre Bekolo [Cameroon], Mahamat Saleh Haroun [Chad], and Abderrahmane Sissako [Mauritania]), the struggles of African filmmakers have not changed as much as might be expected.  At most international film festivals, African-directed films are rare.

The critical problem is that African filmmakers depend on European funding. For example, France finances most Francophone African cinematic production.

This is not strictly an economic issue. If African cinema depends on overseas assistance, how can it be true to its cultural base? Like other development aid practices, African cinema is changed by those to whom it is beholden.

This economic dependency maintains a postcolonial relationship between African filmmakers and the former colonial power. Africa’s indebtedness to European cultural subventions translates into stories that fail to question France’s relation to francophone Africa.

This situation has created two classes of African filmmakers: those whose narratives align with a postcolonial vision, and those whose increasingly marginalized narratives do not. As a result, some African cinema has lost its initial commitment.

Because of its high levels of funding, many African filmmakers moved to Europe rather than remaining in their native countries. I was one of them.

This exodus came about because our own African governments did not welcome us as filmmakers. Today, most African filmmakers live abroad, at least part of the time. Although this migrant life allowed us to make films, it has altered our beliefs about the possibilities of African filmmaking.

Even more than the earlier generation, contemporary African filmmakers have not resolved the problem of the African audience. We have been alienated from them when they should be our primary interlocutors. While a few of our films have achieved international recognition, most Africans do not know them.

This state of affairs raises important questions: Are we still African filmmakers? Or are we diasporic filmmakers?

As we fought to find our place in Europe, a new generation of filmmakers in Nigeria seized the opportunity offered by the arrival of low-cost digital cameras. Dubbed Nollywood, this community leads a new cinematic direction in Africa.

In Nigeria, we witness the emergence of a new wave which will soon represent the continent cinematically.  Nollywood has succeeded where Francophone African filmmakers have failed: it has created a professionally active local film economy, ensuring independence from abroad.

In the beginning, many of us did not hide our contempt for Nollywood’s film production style. We criticized it for starting out as a home video industry using consumer-grade digital video formats. We thought the films lacked well-developed scripts, sophisticated narrative structures, and professional acting. We forgot that these filmmakers were learning. They produced films quickly, and this constant engagement in production improved their skills.

Some film professionals still denigrate Nollywood as amateur filmmaking. However, with the advent of Nollywood, a true African cinema is underway. African crews produce these films with African actors who tell African stories pleasing to African audiences.

Although it is a national phenomenon, Nollywood has impacted the entire continent positively. In my home country of Benin, the cinematic landscape has changed radically, thanks to its geographical proximity with Nigeria and the many African languages ​the two countries share. In Benin, young audiovisual industry professionals no longer turn their eyes towards France, as their fathers did. Now, they want to imitate Nollywood.

Although we must critique simplistically reducing Africa to a country, we can nonetheless talk about a new emerging “African Cinema” with national and regional variances. Production nodes like Nollywood stimulate development in neighboring countries, facilitating connections and promoting learning transfer.

A film industry cannot depend on the foreign box office alone. Each cinema needs a solid home base from where films travel to conquer the world. The first bricks of that base have been laid.

State involvement in film industries will be necessary for African film to flourish. The most immediate threat to Nollywood’s long-term success is piracy. State governments and private companies will need to understand that cinema needs to be taken seriously as an economic and cultural sector–and protected.

I hope art cinema will not be excluded from governmental support.  With coherent national funding policies, the popular movie industry could support art cinema.

We diasporic African filmmakers struggle to exist because of our chronic problem of representation. The “cinema home” that Africa will establish will also empower our work.

As postcolonial Africans, we can work together to overcome the loss of self-confidence in our own potential.

It is with this hope that I conclude with the words of Cameroonian historian and theorist of postcolonial studies Achille Mbembe: “Regardless what happened in the past, we must recover the feeling that we are our own center.”[1]