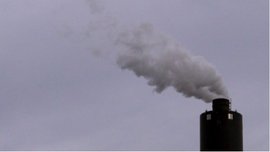 Zlatko Ćosić’s art practice, shaped by the Yugoslavian war and the subsequent displacement of people, connects culture and identity to conflict, immigration, injustice, and the complexities of living in unfamiliar cultural environments. He bridges the concrete and abstract in experiments with performance, installation, and short film. Capturing elements of real subject matter, then presenting them as abstract materials, he reframes content to encourage viewers to reconsider their own contexts in nature and society, inviting the imagination to dissolve static notions of being.

Zlatko Ćosić’s UN-POLLUTE is a short video that entices us with the possibility of reversing the human-made damage to the planet. A silhouetted smokestack consumed a fanning gray plume of vapor. In this way, the video manifests our desire to un-pollute, via images of human-made machines that inhale human-made pollution allowing us to produce and consume energy and its products without interference.

At times, it appears as though the final plume of toxins will be reabsorbed by the offending smokestack, but more smoke reconstitutes in thin air. The sky itself is pale grey, not bright blue, indicating that ecological damage has already occurred as a by-product of human alterations to the planet.

The video conducts an experiment with our expectations. It reworks images of human-made disaster that prey upon indifference with watching the planet die a slow death, taking human and nonhuman lives along with it.

Smokestacks also suggest a human desire to disperse pollution and toxins into the atmosphere—carrying them far away from the location of their production. Asthma and cancer are common in areas near to smokestacks. Acid rain has also been linked to smokestacks that emit sulfur dioxide from coal.

The seemingly antiquated element of an industrial smokestack is actually a human-built feature of the environment that has proliferated in recent decades, since smokestacks release carbon dioxide into the atmosphere. Studies estimate that seven billion metric tons of CO2 are released by smokestacks annually.

The video also points to geoengineering, often offered as a solution by scientists concerned with the environmentalism, skirting the need to rethink capitalist/extractivist systems, and to the futility of our impulses to recycle, reduce, and reuse. Small gestures like sorting our waste and buying in bulk are as self-satisfying as the fantasy of un-polluting, yet they are also dangerous in the sense that they bypass more urgent conversations on changing our habits to save our planet.

Retrofitting smokestacks with carbon filters can reduce the amount of CO2 pollution, but we must give up our fantasy of clean energy and mandate renewable energies instead.

This project was awarded a prize by FLEFF’s selection committee.