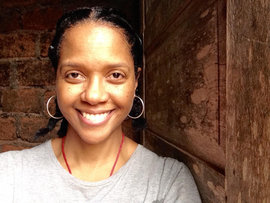 Cynthia Henderson is the Founder and Artistic Director of Performing Arts for Social Change (PASC). An actress and director and a Fulbright Scholar, she is an Associate Professor of Theater Arts at Ithaca College and a member of Actors' Equity Association and the National Alliance of Acting Teachers.  Her work within PASC has garnered the Outstanding Contribution to Social Justice Award from the College Student Personnel Association of New York State. The Cayuga Radio Group has cited her as one of the “20 Outstanding Women You Should Know in Central New York." Her acting and directorial work addresses issues of social and political injustice.

My idea to connect arts, politics, and community began as a project called Theatre for Social Change.

In 2007, I began collaborating with my former Ithaca College student, Amanda LaForge.  She became my assistant and co-founder of the program. We renamed the project to indicate our interdisciplinary work with theater, music, and dance and called our project Performing Arts for Social Change (PASC).[1]

I started working with theatre for social change in the late 1980s.  This collaborative practice influenced my work as a performer, director, and teacher.  PASC projects derive from explicit, unresolved needs within specific communities.

First, our name references “Theatre of the Oppressed,” a theatrical movement founded in the 1950s by Brazilian theatre director Augusto Boal, who advocated theatre as a means to promote social and political change.[2]

Secondly, as an African American actress from the south, I was influenced by the strategies of Dr. Martin Luther King.  Artistic work dealing with social change has roots in the Civil Rights movement, which has employed the arts as a means of social protest since the beginning.

Although PASC includes all the arts, it uses the power of words as a primary focus of  its mission to effect change.

This theatrical practice has multiple objectives.  It can encourage the audience to take action.  It can expand public discourse.  It can empower participants.  It can spur an audience and/or the participants to think in new ways.

Why do I include participants?  Because advocating for social change affects everyone involved. PASC can work with the community to create a performance about a social issue--and then involve the community in the performance.  We also occasionally work with published plays on specific issues that connect with particular communities.

PASC focuses on direct work with specific communities.  We deal with unresolved social and political issues, generating plays from the words of community participants.  For all of us, it is a teaching and learning opportunity. We incorporate the myriad talents of these communities into the work.

A public performance is not the only outcome of PASC’s work.  Sometimes, a group’s ideas need to remain private because of highly sensitive subject matter involving children, criminal activities or other material the participants may wish to work through away from public scrutiny.

PASC operates with a basic code of ethics, which includes a commitment to the truth. We portray the incident as it happened, or it does not make it to the stage.

In summer 2013, I worked with the Beijing New Oriental School in China, conducting a workshop using scenes from David Auburn’s play, Proof. Our participants were enrolled in an English-language immersion program designed to teach conversational English and introduce its students to American culture.

In summer 2014, PASC collaborated with the La Poderosa Media Project in Bahía de Caráquez, Ecuador.[3]  I taught an acting workshop for community members with whom I  created a play focusing on domestic abuse, water shortages, gang warfare, economic challenges, and pollution, issues that were critical to the participants. A citywide festival presented our one-act play, Voces de Bahía.

In summer 2015, PASC convened police officers and civilians from Ithaca, New York for a workshop designed to foster better interactions between the two groups. Workshop participants interviewed Ithaca residents about racial profiling, police officers who had experienced profiling when off duty, and officers  dealing with post-traumatic stress disorder (PTSD) in the aftermath of a shooting. We mounted a mosaic of different perspectives.

In 2015 I traveled to Cameroon as a Fulbright Specialist to facilitate workshops on peaceful conflict resolution. I produced theater workshops at a prison in Yaounde, the capital city, I taught acting workshops at the University of Yaounde 1, and I conducted PASC workshops in the cities of Douala and Buea.

Filmmaker Zigoto Tchaya Tchameni’s We Need the Truth (2015) chronicles the workshop I facilitated in Foumban. The project was a response to the Boko Haram Insurgency and its impact on the people of Cameroon.[4]

Later in 2015, I traveled to Brazil as a Fulbright Specialist to mount a workshop with professors and graduate students from the Universidade Estadual da Paraíba (UEPB) to address the effect of violent crimes. Joao Pessoa, where the university is located, ranks among the top ten most violent cities in the world.

The workshop illuminated this crisis and offered solutions based on dialogue between the community and lawmakers.  Entitled Por Quem Choramos (For Whom We Cry), the project was performed twice.  Since the workshop, the group has revived the play for new audiences in Joao Pessoa.

PASC partnered with the Mental Health Association of Tompkins County to address the stigma surrounding mental health. Working with a team of students, psychologists, and administrators at the local Mental Health Association, we gathered Ithaca community members’ stories to create a play that gave voice to those with overwhelming needs and unnecessary stigmas.

PASC originated to give back to those in my immediate community.  It has grown into an international program that produces proactive social justice theatrical projects.

My thinking about social change has evolved. When I was younger, I wanted to change the world to make it a better place.

Eventually, I realized I did not need to be famous or seek global solutions to mobilize for change.

I could work in wherever my small corner of the world might be.  I learned that this collaborative, community-based theater can propel incremental and scalable change, opening up necessary dialogues and urgent work.

[1] Visit the Performing Arts for Social Change at www.pa4sc.com.