A Love for the Ages

Marlo Schermerhorn ’31 and Cleta Dromgoole ’30 were students in Ithaca College’s music program when they crossed paths on a downtown street—neither remembers its name—where they lived in rented rooms not far from each other. It was November 11, 1928. Marlo had just finished a shift washing dishes at Newman Hall (a woman’s dormitory on Buffalo Street), and Cleta was leaving her room. She was wearing a heavy raincoat, Marlo remembers, and his pants were an embarrassing three inches too short.

“We took to each other right away,” he says. “There was something a little different about it.”

They exchanged little more than a hello that night, but the encounter was the start of the college sweethearts’ lifelong love story. Now both 102 years old, Marlo and Cleta celebrated their 80th wedding anniversary in late June, making them the college’s oldest known alumni and its most enduring couple.

“They are still always sitting there holding hands,” says Devon “Pete” Schermerhorn, 78, the couple’s only child.

Since 2010, the Schermerhorns have lived at Sugar Hill assisted living facility in Dalton, Massachusetts, moving from their longtime home in Lancaster, New York, to be closer to their son and three younger generations of the family. Chatting from Sugar Hill this summer, Marlo reflected on years of adventures that sent the couple around the world. “We always wanted to do interesting things,” he says, “and do them together.”

During their careers as music teachers, Marlo and Cleta taught most of the grade levels in their respective Erie County, New York, school districts. But even a school full of students wasn’t enough to satisfy their love of music.

Marlo founded what would become the Lancaster Town Band, while Cleta directed three choirs at a local church and took on private voice and piano students. They founded men’s and women’s choral groups and occasionally combined them to form the Lancaster Community Chorus, which performed at international festivals and competitions, including one at Carnegie Hall. That experience was more challenging than exciting, Marlo remembers. “There were only two choruses competing, and the other was far superior to ours, so we only got second,” he says.

Each summer they traveled, often crossing the country by car. On a few occasions, “They would take a freighter and be gone for months at a time, going to places like Fiji, New Zealand, and Australia,” Pete says. They drove from Buffalo to Peru one year and across Eastern Europe another, he recalls, and Cleta and her sister once traveled via bus from London all the way to New Delhi.

Their adventures during the ’60s included a stint in Paraguay, where they lived on 750 forested acres near the Brazilian border. “They cleared a bit of land and built a house,” recalls granddaughter Linda Schermerhorn, 56. “They thought they were going to grow coffee, and then it was sugarcane.” Eventually, they decided it wasn’t worth the effort.

Wherever the Schermerhorns went, they made friends. Pete recalls one Thanksgiving dinner that included guests from Nigeria, Egypt, and Sri Lanka. “It was such a bizarre thing for a little town in Western New York,” he says.

But the two had come from quieter origins.

Born near Howe, Indiana, Marlo grew up on the family farm as the middle child of seven and graduated high school as valedictorian. Ithaca was one of two music schools he considered. He joined the college’s chapter of Phi Mu Alpha, a professional fraternity for men in music.

IC was less of a trek for Cleta, who grew up as the youngest of two in Finchville, New York, just a few hours away. She was a beauty even at a young age, receiving a gold medal as the prettiest baby in Orange County. And she was smart, too. She graduated high school early and started classes at Ithaca just weeks before her 16th birthday.

At the time the pair met, the country was in the grips of the Great Depression, but they count themselves fortunate to have been able to afford the “exorbitant” $200 tuition and continue their educations—Cleta through an inheritance, and Marlo by working semesters washing dishes and summers unloading trucks at a shipping company.

Cleta graduated first in the spring of 1931, and she found a job right away teaching music in Cornwall-on-Hudson, New York. Marlo took extra sessions to complete his degree a year early that summer. “That day was a fortuitous one for me,” he says. “I graduated, and two members of the board of education for Lancaster, New York, happened to be there looking for a music teacher.”

Naturally, when the couple set a wedding date of June 29, 1932, they wanted to marry in Ithaca. A local friend, Moira Blean, offered her backyard. Marlo almost didn’t make it in time owing to a canceled train. “I had to get the old flivver [a nickname for the Ford Model T] out and hie for Ithaca,” he says. Their month-long honeymoon took them past an unfinished Mount Rushmore, where workers were constructing George Washington’s likeness, and on to Los Angeles, where the city was preparing to host the Summer Olympic Games.

Even after full careers and separate returns to graduate school for masters’ degrees in education, the Schermerhorns stayed busy. Marlo wrote and self-published several books about the family genealogy and one of his own poetry. Cleta continued offering private voice and piano lessons from their home. “Each student gave her a picture,” explains Pete. “By the time she stopped, the whole front of the piano was covered with them.”

They also attended plenty of concerts, of course, including almost every performance of the Lancaster Town Band, which in 2010 recognized the couple at the dedication of a new band shell.

The Schermerhorns say they owe their longevity to good genes, but family members attribute it in part to that fateful day in Ithaca. Says Linda, “They’re never without each other, and I think that’s why they’ve lived so long.”'

Thanks so much for this story -- it's just so sweet and inspiring. I was also delighted to see I'll share my wedding anniversary with the Schermerhorns when I get married on June 29 of next year, in Ithaca as well! Hope we live live as long and have as many adventures as this adorable couple.

What a wonderful story! I think love and music keep people young.

This story is particularly poignent to me. My wife and I started going steady when we were 14, well before I attended Ithaca College. Our romance continued throughout our college years, while she attende college in Buffalo, our hometown.

The Schermerhorns are an inspiration and my hope is my wife and I continue well into our 100's. After all, we have to be around to celebrate Ithaca's 150th birthday and beyond!

...an unfinished Mount Rushmore, these two took a ride together that others only dream of. Ithaca must be a very special place. This story was wonderful and fun and inspiring! I am dreaming of a magical college journey for my son, it is his first choice. Here's to Mr. and Mrs. Schermerhorn, thanks for their memories!

Sad news I'm afraid as Cleta died in 2014 aged 103. I was hoping that one day they could have been the oldest couple ever. I also hope that everyone can have a marriage and happiness like Marlo and Cleta.

Sad news indeed. You can read a tribute to Cleta here: https://www.ithaca.edu/enduringtribute/?item=7004 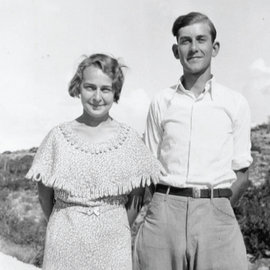 When the couple set a wedding date of June 29, 1932, they wanted to marry in Ithaca.

Marlo and Cleta were students in Ithaca College's music program when they crossed paths on a downtown street. 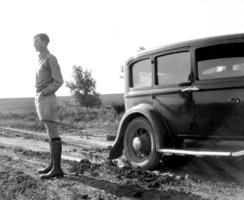 Marlo standing in front of his Model T on his honeymoon. 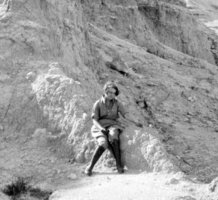 Marlo and Cleta traveled cross country for their honeymoon, making stops at the Grand Canyon and Badlands National Park. 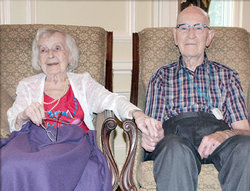 Now both 102, Marlo and Cleta celebrated their 80th wedding anniversary in late June 2012.