Chris Lotsbom ’13 hasn’t missed a Boston Marathon in more than 20 years. Growing up in Walpole, Massachusetts, it was a family tradition to pack lunches and head along the course to cheer on runners every Patriots’ Day. Even while a student at Ithaca, Lotsbom took a bus to New York City and then to Boston, traveling for 12 hours to catch the race.

Lotsbom has yet to run in the Boston Marathon, but he’s no longer on the sidelines. Now he’s behind the scenes as the communications manager for the Boston Athletic Association (BAA), the organization responsible for the country’s oldest annual marathon.

His trips to see the race inspired Lotsbom to pick up running in high school. One day, he received a brochure from Ithaca College, and the sport media and sport management majors piqued his interest. But he didn’t know if he would be fast enough to run for the cross country team. “I made it by the skin of my teeth,” Lotsbom says of his freshman and sophomore years. But in his junior season, he began running twice a day and had logged a higher number of miles during the summer. He improved so much that he qualified to run in the Northeast regional meet.

“To earn a spot on the starting line at regionals was really special,” Lotsbom says. “It's the only meet of the year we wear gold uniforms.”

Lotsbom began working in the running industry his freshman year, with a writing position for Race Results Weekly. That gig led to freelance work for various magazines and running companies, as well as an internship with NBC for the 2012 Olympics.

His junior year, Lotsbom began working with the BAA as an intern and continued part time after graduation. Now with a full-time position, he is responsible for the organization’s messaging, covering things such as media management, press releases, printed materials, and participant newsletters.

BAA races span the year, with a 5K, 10K, and half marathon, but its main event is the Boston Marathon. And it turns out organizing the race is a lot like training for it. While registrants begin logging longer miles in January and February, Lotsbom is working hard to make his print deadlines. As race week arrives in April, there’s a lot of adrenaline—for the 30,000 participants who are anxious to toe the starting line and for the 30 staff members making last-minute preparations for their arrival. And come race day, Lotsbom says it’s all about execution. While thousands of runners are putting their race plans into action, he and his team are making sure their own plans come together to provide a memorable race experience.

“The coolest part is how much this race impacts others,” says Lotsbom. “People work so hard to get to the starting line, and when you walk around Boston and see all the marathon jackets and finisher medals, you realize it’s a dream come true for so many. It makes all those long days worth it.”

The one bad part about working for the BAA? If you’re in charge of the event, you can’t run in it. Lotsbom hopes to do so someday, and he has already qualified with his two marathons, including a personal best of 2:48:14 in New York City. Lotsbom trains with the BAA running club, logging between 50 and 80 miles a week, and he plans to race another marathon in the next year. Another goal is to return to Ithaca for the cross country team’s annual alumni race. So far, work and travel has kept him away, but he’s excited to come back to the place where he enjoyed working hard with his teammates and where he received an education that continues to serve him.

“Everything I learned at Ithaca, I use in my day-today in some form,” says Lotsbom. “So many times, the things I studied in class have come up, whether it’s small things like preparing press releases or race notes, or big PR communications strategies. My Ithaca education has helped in my career, and I’m very thankful for that.” 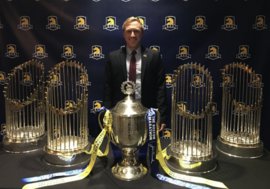