In Mister Rogers’ Neighborhood, an electric red and yellow trolley car, aptly named Trolley, used special tunnels as a portal between the real world and the Neighborhood of Make-Believe.

Sketch comedy group the Birthday Boys didn’t make it so easy for Car-y, a red convertible appearing in the pilot of their eponymous new show, which premieres on the Independent Film Channel this fall. The remote-control car’s path to the (apparently far less accessible) Land of Pretend takes Car-y down traffic-heavy U.S. Route 101 in Los Angeles and into increasingly dangerous situations. But Car-y’s true journey started almost a decade ago and more than 2,500 miles away—at Ithaca College.

In the car for the wild ride are IC alumni Jefferson Dutton ’05, Dave Ferguson ’06, Mike Hanford ’05, Tim Kalpakis ’05, Mike Mitchell ’05, and Chris Van Artsdalen ’05, who, along with Matt Kowalick, make up the Birthday Boys. “Our own TV show is some­thing we’ve been working toward forever,” says Ferguson. “It’s the ultimate goal for a sketch comedy group” and a new challenge for “the boys,” who have become known in Los Angeles for live shows at the Upright Citizens Brigade Theatre and online for viral comedy videos.

One of their best-known skits, “Pool Jumpers,” parodies stylized documentaries like skate-culture Dogtown and the Z-Boys regarding the influences of jumping into pools. (It has gained “immortal” status on Funny or Die, Will Ferrell’s comedy video website.) “We were just kids,” intones Han­ford in the 2010 sketch. “We didn’t know what we were doing. We didn’t know that it would lead to anything.”

Although the Birthday Boys grew up watching—and imitating—influencers like Saturday Night Live, Steve Martin, Conan O’Brien, and Monty Python’s Flying Circus, they say careers in comedy seemed out of reach. “It just never occurred to me that someone could work in it,” says Dutton. However, a job directing or writing for television came across as nearly as impos­sible but almost within reach—with the right education. Explains Kalpakis: “I was on the lookout for a TV school specifically, and Ithaca has that reputation. It was the only school I applied to. [Ithaca was] where I wanted to be.”

It took time for the guys’ paths to cross despite their shared interests. Mitchell, who was a computer science major until his junior year, met Dutton while looking for help editing a film project. Through student-run ICTV, Ferguson, Hanford, and Kalpakis worked together making 30 Minutes with Dave Ferguson, weekly comedic news broad­casts in the style of The Daily Show.

“It became clear that none of us could regularly read a newspaper to stay up on current events, so it became a sketch show,” Kalpakis says. (That’s when he came up with the concept of Car-y.) VanArtsdalen, who was friends with Dutton, got to know most of the others during a shared semester at IC’s Los Angeles program.

Los Angeles was, they agreed, the place to be after graduation. “We were five dudes, no jobs, all with gross beards,” Dutton says of the group’s arrival in L.A. in September 2005, where they ended up sharing a house on the back end of Hollywood Hills. The holdout, Mitchell, says he often slept on the guys’ couch after deciding that the home he’d been staying in was haunted by the ghost of Charlie Chaplin’s mother. (Incidentally, the crew now writes comedy in Charlie Chaplin’s former United Artists studio).

They all started by taking work as they could get it—in the entertainment industry (as production assistants) and outside it (Hanford briefly ran errands for a billionaire; Kalpakis was a telemarketer). “You would work up a little nest egg, quit your job, and essentially free fall, thinking you would get a writer’s job,” Dutton says. In the evenings, they began taking improvisational theater classes at the Upright Citizens Brigade The­atre. There, they met Kowalick.

And the Birthday Boys were born.

Well, unofficially, at least. It took them until early 2008, months after they started performing together at open mic nights, to settle on the name. “We just kept signing up as the Seven Guys,” Ferguson says. The Birthday Boys stuck, he says, as a reflection of the group’s collaborative nature: “Everybody has a birthday.”

A regular monthly sketch show at the UCB Theatre followed for them, as well as hosting gigs for some of the open mic nights and independent video sketches on Funny or Die and other outlets. Skills they learned at Ithaca years earlier, with the access they had to equipment and encouragement to get hands-on experience as freshmen, gave the guys an edge.

“We never hired camera crews or sound guys,” says Ferguson. “We’d just do musical chairs to get the other angle.” The group’s directing and editing skills gave the videos higher production value than much of the amateur YouTube fare at the time.

By 2010, things were picking up steam, and the guys were working in comedy (for their day jobs!) as writers, actors, and production assistants on shows as varied as Parks and Recreation, Conan, The Simpsons, Portlandia, and Comedy Bang! Bang! The Independent Film Channel (IFC) is home to the last two upstarts as well as comedy classics like Monty Python and the Flying Circus.

Hanford was cast by the Portlandia direc­tor for its “Brunch Special” and Van Artsdalen and Dutton directed a number of web series for IFC. Scott Auckerman, comedian and creator of Comedy Bang! Bang! introduced the Birthday Boys to IFC, which hosts his show.

“These experiences and our live shows in L.A. definitely played a role in exposing us to IFC,” Ferguson said. “But our meetings with IFC about a Birthday Boys sketch show grew from taking a pitch out around town.”

The Birthday Boys had been collaborating with Bob Odenkirk of Breaking Bad and Mr. Show, when they began talking about doing a televised sketch show together. With Odenkirk and Red Hour Films (Ben Stiller’s company), the Birthday Boys took their pitch to the cable marketplace. IFC liked their pitch and ordered a half-hour pilot. Based on the pilot, IFC ordered a 10-episode series in March. The first season is scheduled to premiere this October.

MORE THAN THE SUM

As Mitchell puts it, “Seven white guys trying to sell a sketch show is a really tough sell.” The Birthday Boys say executives repeatedly told them they just weren’t in the market for a group show: producers were more interested in hiring writers to craft sketches around one funny personality. “There was a moment—and I’m sure people who are coming up still feel this way—that I wasn’t sure we were going to see any more sketch comedy on TV,” Ferguson says.

What helped set them apart and seal the deal, they say, is having a unique style. While much of comedy comes from things comics love to hate (inane political comments that turn into fodder for The Daily Show, for example), the Birthday Boys tend to pull positive inspiration. “A lot of our sketches start with a movie trope or a classic scenario that we really like,” says Van Artsdalen. Then they push it over the top, or dig for a new angle—such as in the sketch “Rough Patch,” where the oft-seen scene of an angry girlfriend (actress Abby Elliott of SNL) throwing her boy­friend’s possessions out a window becomes a battle of wills as several sympathetic men in the street throw it all back inside faster than she can remove it.

With positive thoughts as a starting point, the resulting comedy tends to be clean. But the guys are quick to point out that it’s not spotless. “It’s not that we want to avoid the risqué or profane, but to us sometimes that’s not the funniest thing,” he says. “We’re not afraid to do edgier stuff. We’ve all been naked onstage at one point or another.”

Years of collaboration have given the seven comedians a cohesive voice and vision. They work as a group instead of fighting for the spotlight as individuals. “For us, there’s always been this idea that the group is worth more than the sum of its parts,” Dutton says.

That’s a rarity that sets the group apart, says Odenkirk, who is now executive producer for The Birthday Boys and codirector with Dutton and Van Artsdalen. “There are many, many sketch groups with one outstanding video or one super-funny scene,” he says, “but the guys have a voice that they share and, once you have a sense of it, all of their work has that sensibility that you can appreciate.”

The Birthday Boys’ challenge is to keep their comedy machine well-oiled for an intense production schedule: writing 10 half-hour episodes, each with 6 to 10 sketches, over the course of 11 weeks in the spring followed by 2 weeks of preproduction and a full summer of shooting before the October premiere. They don’t seem daunted. “This is what we have always wanted to do, so it doesn’t feel like too much work at all,” says Mitchell. After that, it’s up to the viewers, says Hanford: “We’ll see if the public finds us funny and hope for a season two.” 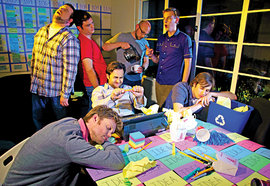 Birthday Boys at work in their L.A. studio. Photo by Pete Ambrose '05