Using the Second Life online universe as a teaching and marketing tool.   by Zeke Wright ’07

Second Life is no computer game. It’s a “metaverse,” or alternate universe. It exists online, and its population is growing daily. There is no predetermined way to play, and you don’t win or lose. Users do enjoy a “virtual life.”

Kim Gregson, associate professor of television-radio, early on recognized the metaverse’s educational potential; now Second Life is an integral part of her Qualitative Research Methods class. And with the support of dean Dianne Lynch, the Park School and Ithaca College are taking full advantage of Second Life and related digital media.

Millions of people have registered since the program went public in 2003. They spend their time “in-world” in any way they choose. They can explore, own property, build houses, and buy clothes for their virtual selves. This open-endedness makes Second Life an exciting prospect for participants and, increasingly, businesses, entrepreneurs, and institutions of higher learning.

After Gregson’s students create accounts, they are set loose, first to observe, later to interview the inhabitants of Second Life — a huge and diverse pool of people from around the world. Austra Zubkovs ’07, a TV-R major who was in Gregson’s class in the fall, cites the ease with which students can access research subjects.

The promise of 3D virtual realities has existed since the inception of personal computers and the Internet. As technology expands and broadband becomes more available, the ability to create and maintain a virtual world with thousands of active participants at a time has been realized. The possibilities are endless, Gregson says. “Everything is created by the users, and students can study everything.” The introduction of in-world banks was one example. The in-world currency, the Linden dollar (after Linden Labs, the company that developed Second Life), can be converted to and from U.S. dollars, with ATMs located throughout Second Life. What role do banks play? How do they function without a government? These are some of the questions Gregson’s students ponder.

Second Life is being used for things that would be impossible or costly in real life. There is a large-scale model of a heart, complete with murmur, for medical students to explore. The International Spaceflight Museum and Second Life Planetarium both hold universally accessible educational events. And Zubkovs, with Gregson and assistant professor of philosophy and religion Rachel Wagner, is documenting religious items found in Second Life. (The research was presented at the 2007 Pop Culture Association conference.)

The past few months have seen a marked increase in the presence of learning institutions in-world, “and it’s just going to blossom,” Gregson says. Today, more than 100 schools from throughout the world are buying islands and even holding classes in Second Life. The Park School has already purchased two islands, where faculty and students are creating buildings and an IC community. Virtual land is discounted for academic institutions, so for IC a small island of about 16 acres costs $980. Along with this initial cost comes a monthly land use fee for maintenance of $150.

Lynch acknowledges the important role in coming years of what she calls “immersive and participatory media.” “It’s our responsibility,” she says, “to stay ahead of the curve.” Lynch credits alumni and parents for contributing to the Ithaca Fund for the Park School, which has allowed her to purchase in-world property and increase the school’s presence.

November marked the first time a user became a millionaire from profits earned entirely inside Second Life — and that’s a million real U.S. dollars. German citizen Ailin Graef created her fortune based on extensive virtual real-estate holdings, which she develops for resale or lease. Real estate barons like Graef build malls in which technically adept tenants open stores selling the virtual goods they’ve created (clothes, furniture, bicycles, anything), and pay rent. It adds up, and the landlords can convert their Lindens into U.S. dollars. But with the recent creation of an in-world stock market, maybe it’d be wise to reinvest.

Second Life is the largest and most successful such program to date. Linden Labs is privately held, so there’s no way to know its annual revenues, but the large and growing company revolves around the metaverse.

Not everyone is out to make a profit in Second Life; many are just looking for a good time, a challenge, or a learning experience. IC will now be able to broadcast speakers who come to campus. Norman Solomon’s recent talk, for example, could be streamed into Second Life. Such exposure for IC could make Second Life an additional avenue for recruiting students or faculty.

Tom Torello ’87, executive director of marketing communications, calls Second Life “a place we need to be.” And while the metaverse itself might not be the future, it’s certainly a harbinger of things to come. 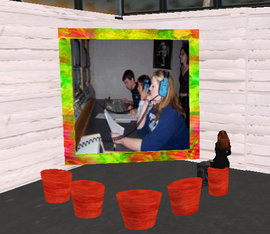