Chasing the Ghost of Melesina Trench

Ithaca professor Katharine Kittredge went to England in 2002 looking for the subject of her next research paper. What she found was a gripping tale of loss, adventure, and romance—the ghost of a Romantic-era poetess who still haunts her to this day.

Like many good ghost stories, this one starts with a grave: Jane Austen’s, in fact.

Frustration had driven Kittredge to Austen’s grave in Winchester Cathedral. Three weeks combing national libraries and local record offices across England and she’d come up dry on prospects for her project. The Hampshire Record Office was near the train station, and Kittredge says she felt compelled to stop by after paying homage to Austen. A teenager was hogging the only computer, so she hauled the old paper indexes off a shelf and started flipping through.

“There was this name that came up over and over again: Melesina Chenevix St. George Trench,” Kittredge says. “It sounded like something out of Dickens. What a name! And there were thousands and thousands of documents associated with her.” Kittredge’s curiosity got the better of her. She requested a few documents to peruse. “I planned to move on and do a sampling of any other women from that time period, and I just got stuck on Melesina,” she says. “She made me laugh, and she has a great turn of phrase.”

“It’s like time travel. You’re seeing through her eyes, and she’s looking at everything—what’s coming up in the garden, what’s happening in London, and what the latest gossip is in the local church.”

The last document Kittredge requested before the Hampshire Record Office closed for the day turned out to be a small, unassuming brown journal. But the words on its opening page moved her to tears: “Frederick Trench expired at a quarter before eight o’clock in the evening, June the seventh, 1806—aged two years eight months and four days.”

Throughout what Kittredge came to call the “mourning journal,” Trench tries to work through her grief, capturing details and remembrances of her son and reaching for comfort from philosophers and poets. It brought the experience of motherhood in that time to life, Kittredge says.

“There was no doubt in my mind that the journal was unique, and that what it offered—a view into the most private thoughts of a woman in the past—made it an extraordinary find,” Kittredge later wrote of the discovery.

She became determined to bring it, and Trench, into the modern world.

The more Kittredge studied the Anglo-Irish poetess, the more fascinated she became. Trench was known as one of the great beauties of her day, and her early life revolved around high society, she says. After she got married, she juggled her roles as a wife and mother with those as a writer, intellectual, and activist.

“She’s just gone through a really rough labor and she’s confined to her room for weeks, but she has her oldest son there copying out the poems that she’s submitting to magazines,” Kittredge says. “It’s not enough that she’s overseeing a household. She also wants to keep moving her writing forward.”

“Her parenting book wasn’t quite a best seller, but it was a steady seller,” Kittredge says. “They say it’s still in print in India somewhere.”

Kittredge believes Trench’s epic poem, Laura’s Dream; or, The Moonlanders, to be one of the earliest examples of modern science fiction. Mary Shelley is hailed as the founder of that genre, but Trench’s story of a human-like race with purple wings—who are “born” when dug up out of the ground, beginning life as elderly and then aging backward—predates Frankenstein by two years. And the journal that originally gripped Kittredge, about Melesina’s lost child?

“The more I think about it, the more I believe that Frederick, the baby who died and led to the creation of the mourning journal, may have been an illegitimate son of the Duke of Cambridge,” Kittredge says.

She suspects, but has been unable to confirm via records, that Trench and King George III’s youngest son—Prince Adolphus, the Duke of Cambridge—were involved.

“The parts of the travel journal that Melesina’s son published in the 1860s depict them as being casual acquaintances,” she says. “But when war was coming to Germany, Melesina was the per.son that the duke took back to England. He had a ship waiting for him on the coast, and he held that ship until she was able to join him.”

The proof lies in the correspondence between the two, which isn’t in the archives or any private collection that Kittredge has found.

“Just the fact that the letters are missing is suspicious. I mean, who destroys royal letters?” she says. “They have to be somewhere.”

Tracking Trench has proved to be a massive undertaking. She was a prolific writer, and many of her musings—not just published work but also personal letters, journals, and even poetry scraps on the back of laundry lists—have been preserved.

“I can say where Melesina was, if not every day, then almost every week of her life from age 29 until her death,” Kittredge says. “She wrote that often.”

“Think about how often we sit down and send an email or post something on Facebook,” she says. “We make ourselves known on a daily basis. At that time, the post was being delivered twice a day. There was no phone, no telegraph. It was a way of connecting with other people.”

Trench’s papers still hold some mysteries: she often used abbre.viations to refer to people in her social circles. “It’s really frustrating because there are times when I have no idea who she’s talking about,” says Kittredge.

Whether it’s been luck—or nudges from Trench’s ghost— Kittredge has continued to unearth new details of her story.

Trench was orphaned at the age of 2 and was raised by her grandfather, the Bishop of Waterford. Following his death when she was 12, she spent most of her adolescence in and around Dublin. She married her first husband at 19, and he died two years later, leaving her with one son. She moved to England permanently in 1810. At this point her health was significantly damaged by constant late-life child bearing, making travel uncomfortable. Her husband Richard Trench continued to spend a considerable amount of time in Ireland overseeing their properties until and after her death.

“She was married to Richard when Frederick was born, but calculating from the age given in the mourning journal, she was almost two months pregnant at the time of their marriage,” Kittredge says. “This is what makes me suspicious that the child may have been the Duke of Cambridge’s.  We have no record of their meeting in January 1803 (when Frederick would have been conceived), but at this time he was still unmarried, visiting his sister’s house on the border between Germany and France, so…”

After she published an article about Trench in the Aphra Behn Society’s online journal, Kittredge received an email from a reader who turned out to be one of Trench’s great, great, great granddaughters. That correspondence evolved into an invitation to browse a forgotten trunk of Trench’s journals, passed down through one of Trench’s sons, and to speak at an event attended by more than 20 of her living descendants.

“Having her descendants welcome me with open arms has been really delightful,” Kittredge says. “I was surprised they are as aware of her as they are. They’re a family who prizes their past.”

Other gaps, Kittredge expects, will remain unfilled. Trench wrote under pen names for some of her later work, and although there are teasing references in letters and notebooks, archives are likely to be a dead end on those missing poems and essays.

“She was publishing a lot in Ireland, and because of the troubles there, there are huge gaps in the Irish archives,” Kittredge says. “It’s especially difficult because she was publishing in very tiny periodicals.”

Finding a modern audience for Trench hasn’t been easy.

“There’s been some traction, but part of the problem is, Melesina isn’t political,” Kittredge says. “She’s more of a domestic writer. So she’s of interest if you want to learn about the time period or if you’re looking for an entertaining diary. But she isn’t necessarily a feminist author; she’s not challenging the status quo in any way. The way we have traditionally used texts from the past doesn’t make a space for somebody like her. She’s in that hazy space between popular reading and historical artifact.”

Kittredge has made inroads, publishing more than a half-dozen journal articles on aspects of Trench’s life and work. A documentary, from Qina Liu ’13, tracked the project and was itself published in an international journal that you can watch on YouTube: Chasing the Ghost of Melesina Trench.

Kittredge has transcribed the mourning journal and has drafted a biography that she has just started shopping to book agents. And Ithaca College has been supportive throughout, says Kittredge, providing her with summer research grants and financing research trips.

“A lot of times, when you teach as much as we do, it’s impossible to keep your research going when you’re in the middle of meet.ing with students and grading papers,” says Kittredge, who has been teaching at Ithaca since 1990. “Having the summers to ful.ly devote myself to this has been crucial. I’ve been really fortunate that there’s been a steady level of support.”

Even as Kittredge works to revive Trench’s name, she is far from forgotten.

“That’s one of the things that kept me going on this project: I felt like I had made a promise to her,” Kittredge says. “At various times Melesina talks about wanting to have some level of im.mortality, wanting people to know of her after she’s gone. I think she’d be really pleased to know people are still talking about her, and that her journal can still make people cry.“ 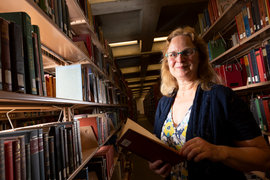 Katharine Kittredge in the library. Photo by Giovanni Santacroce