On May 4, the Ithaca College Chamber Orchestra performed “Música Muisca,” an original piece by well-known Colombian composer Diego Vega. He was invited to write the composition upon winning the first Chamber Orchestra Composition Competition hosted by the School of Music. Vega was one of over 100 applicants submitting three sample works for the contest.

Vega added Ithaca College’s Ford Hall to his extensive list of world famous concert halls from Latin America and the United States to Europe, including the Notre Dame Cathedral in Paris, France.

Despite his world fame, he is no stranger to central New York. “I have a long relationship with Ithaca,” he says. “I lived there for five years. It’s a place I love very much.” Vega holds a doctorate of musical arts from Cornell University and served as a member of the theory and composition faculty at Syracuse University.

Over his career, Vega has written works for orchestras, large ensembles, chamber ensembles, choral ensembles, and solo performances. He began composing “Música Muisca” in December 2010 and submitted his work to the Ithaca College Chamber Orchestra the following February.

“Chamber orchestras or large ensembles give you colors and timbre to choose from,” says Vega. “You can combine so many things. It’s a medium in which I work fast because [sounds] are not as exposed as they are in small groups.”

Assistant professor of music Jeffery Meyer, who designed the composition competition, explains that contemporary composers often write for larger ensembles, so this competition came as an impetus for composers to write new works for the smaller chamber orchestras.

“There are always challenges with preparing a piece that has never been heard,” Meyer says. “There is no recording or reference as to how the piece sounds.”

Meyer conducted the chamber orchestra that performed Vega’s composition. He and the student musicians did their best to imagine the way the piece was intended to be performed before Vega arrived on campus. They only had two rehearsals with the composer before the concert.

“Diego has very good ears,” says Meyer. “He was able to suggest several things that improved our performance.”

At the performance, Vega graciously accepted the applause before explaining his inspiration for the piece. Música is the Spanish word for music; Muisca is the name of an ancient, sophisticated culture of people who inhabited a region on the Eastern Cordillera of the Colombian Andes from 1000 to 1538 A.D. Bogotá, Colombia, where Vega was born, was important to the Muisca.

The Ithaca College Chamber Orchestra then proceeded with a stunning performance of the composition, rich with mysterious and suspenseful themes that evoked not only the majesty but also the cold and fog of the highland region of the Muisca people.

“Diego’s music stood out as beautifully crafted and embodying a unique and meaningful voice,” says Meyer. 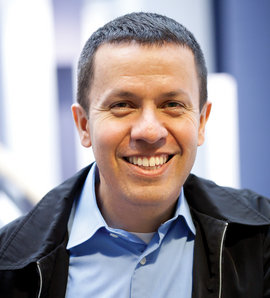