It's All in the Performance: Leonisa Ardizzone '90

When you mix equal parts educator, leader, author, and jazz singer, whom do you get? Leonisa Ardizzone. The executive director of the Salvadori Center, a nonprofit education program in New York City, has written her first book, which will be on bookshelves this summer, and she and her quartet recently released their debut CD, Afraid of the Heights.

As a child Leonisa studied piano, violin, oboe, clarinet, flute, and saxophone, as well as voice. But as a biology major at Ithaca College, she had no time for music. When she returned to Ithaca to work in 1994, she met a professional guitarist with a rock band—the man she would later marry, Chris Jennings. He heard her sing, and they began to perform jazz standards together, first in Ithaca, later in Seattle, and then in New York City, where they moved eight years ago and formed the Leonisa Ardizzone Quartet. The quartet has been together ever since.

Leonisa received her master’s degree in science education from Western Washington University and a Ph.D. in international education development from Columbia University’s Teachers College. “I became a social activist,” she says, “when I was working in Guatemala and it became clear to me that the world is not just. I believe that education is the most powerful force for social change, and I feel a responsibility to help make the world better. So I have dedicated my career to working with underserved children in inner cities.”

After teaching educational philosophy, psychology, and sociology; curriculum development; and science education at Adelphi University and Fordham University, last July Leonisa became executive director of the nonprofit Salvadori Center. The Salvadori Center uses the built environment to educate children and their teachers about architecture, engineering, and urban planning. Founded in 1976 by Columbia University professor Mario Salvadori, it has expanded beyond the classroom with special construction projects including a 40-foot model in Bryant Park of the Verrazano Narrows Bridge, a model of Manhattan for the New York Hall of Science, and a skateboarding facility at Riverside Park on the Upper West Side.

The Salvadori Center’s learning model closely resembles the performance-based learning that Leonisa experienced at Ithaca College. “My junior research project, studying the role of prolactin in the process of lens regeneration in Notophthalmus viridescens (the red spotted newt), was pivotal in my education,” she says. “It’s what made me decide to become a teacher.” She admits to having been a less-than-stellar student: “[Biology professor] John Confer told me during my sophomore year that I was not going to get a degree in biology,” she says. “But I was determined. He and my adviser, Lucille Schmeider, supported me throughout my time at Ithaca. I am eternally grateful to them.”

Instruction at the Salvadori Center stresses conceptual understanding of a subject, rather than “teaching to the test.” In working with their classmates on projects in their own communities, students not only learn to understand the built environment, but also develop a sense of citizenship and involvement in their neighborhoods and communities. “We emphasize sustainability in our projects,” Leonisa says. “One of our groups is designing a ‘green’ roof for a school in the Bronx.”

Although her work is demanding, Leonisa plans to continue her singing career. “It’s difficult to find time to rehearse,” she says. “Chris and I practice whenever we can find a few minutes, and we pull the band together as a performance approaches. Most of the time, though, I am one of those ‘crazy New Yorkers’ who scats out loud in the subway with my iPod on.”

Leonisa and Chris, who produced the CD as well as playing guitar, are excited about the release of Afraid of the Heights. The CD has been favorably reviewed by jazz critics. The quartet “interprets jazz standards and original songs in a way that will in turn have you weeping for a lost love and smiling with joy,” read one review.

Since their daughter, Rafaella, was born four years ago, Leonisa has limited her performing to one gig a month. “Rafaella is a jazz singer, too,” Leonisa points out. “I used to sing her to sleep with standards, and now we sing together. She knows the words to every song on our CD. Music feeds both our souls.” 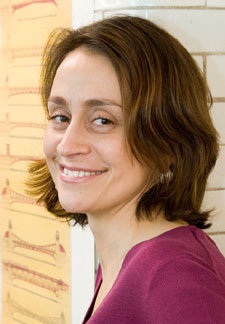