Honoring the life’s work of a friend.   by Zeke Wright '07

Operation Crossroads Africa has sent 11,000 U.S. young people to countries in Africa since 1958. Now two IC students each summer—Park School or politics majors—join their numbers, thanks to an award established in memory of Reginald “Reggie” Simmons ’75 by his lifelong friend Bob Iger ’73. The aim of the New York-based cultural summer ex-change program is to promote understanding among U.S. young people of Africa and the African diaspora through firsthand experience.

Reggie Simmons spent his professional life working in and on behalf of the people of the African continent, beginning with his first Operation Crossroads Africa trip to Ghana in 1979. Simmons died suddenly in Sierra Leone in November 2003, soon after celebrating his 50th birthday. This April, a ceremony and reception were held on campus to announce the inaugural recipients of the Reginald Simmons Memorial Award: film, photography, and visual arts major Krystal Maughan ’08 and communication management and design major Michelle Diemer ’08. Guests included  Jacqueline Kakembo, president of the DC alumni chapter of Operation Crossroads,  and Simmons’s family.

Maughan’s interest in the program was piqued in part because of her homeland, Trinidad. “I grew up with a strong sense of my culture,” she says, “and, because my country is multicultural, there’s a need to discover or to see the countries that [your forebears] came from.”

Diemer had spent time abroad, in Ecuador and the Dominican Republic. “Those experiences were so challenging and rewarding,” she says, “offering me an opportunity to learn about other cultures. This program offers similar service opportunities in Africa.”

Both Maughan and Diemer spent two months in Gambia, but in different roles and different areas of the country. Maughan worked at a hospital devoted to maternity and HIV/AIDS patients. Deimer helped construct a library in a small town of about 7,000. 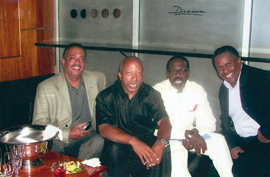