Uncovering the Mysteries of the Maya

The steamy jungles of northern Guatemala don’t reveal secrets easily. For centuries, the overgrown vegetation has choked and concealed the remains of the Maya who once tamed the landscape. The jungle presents a dense and challenging barrier, slow to yield to generations of adventurers, researchers, and modern scientists seeking to learn more about the ancient civilization known for its sophisticated hieroglyphic script, art, architecture, and mathematics. Two years ago, however, technology that allows for digital de-forestation uncovered thousands of Maya structures previously undetected beneath the smothering growth. The large-scale aerial survey, coconducted by archaeologist Thomas Garrison, assistant professor of anthropology at Ithaca College, has done more than reveal millennia-old secrets.

“Frankly, it’s turning our discipline on its head,” he said, as long-established notions about the size, density, and history of the Central American society were upended by the data almost overnight.

LASER SHOW IN THE JUNGLE

Light detection and ranging—or LiDAR—is a method of mapping from the sky. An airplane-mounted device sends a constant pulse of laser light across a swath of terrain; precise measurements of how long it takes the emitted beams to bounce off surfaces are taken and translated into topographic data. The laser pierces through the smallest gaps in the vegetation to record the lay of the land below with remarkable accuracy: a single pixel of visual data is the equivalent of one square meter on the ground. The resulting data can be tweaked to filter out vegetation, thus offering an unencumbered view of everything else on the surface.

Garrison worked with two colleagues from Tulane University and the Fundación PACUNAM (Patrimonio Cultural y Natural Maya), a Guatemalan organization dedicated to cultural and natural heritage preservation, to coordinate a massive LiDAR survey in that country in July 2016. The result was the mapping of 10 large polygonal areas, totaling 2,100 square kilometers across segments of the Peten forest region that encompasses several major Maya sites, including the largest at Tikal, and nearby El Zotz, where Garrison focuses his research.

The massive amount of data took a long time to process; Garrison and others waited until early 2017 before they could start combing through the survey results. With the jungle digitally stripped away, the findings were readily apparent: the LiDAR mapping revealed over 60,000 previously unknown structures, including pyramids, palace structures, terraced fields, roadways, defensive walls and towers, and houses. Archaeologists realized immediately that the ancient population centers they spent de.cades studying are much bigger than they speculated.

"Everyone is seeing larger, denser sites—everyone,” Garrison said. “There’s a spectrum to it, for sure, but that’s a universal: everyone has missed a settlement in their [previous] mapping.”

Especially telling to Garrison are newly revealed agricultural features that would be necessary to support the lowland Maya population during their centuries of civilization—population estimates have now expanded from a few million to 7–10 million because of the LiDAR survey—and defensive structures that suggest warfare was far more prevalent than previously known. The implications are profound.

“It totally changes the way that we think about how things are configured in that landscape; it changes our research questions,” he ex.plained. “These places just aren’t what we thought they were.”

A HISTORY OF EXPLORATION

The Maya civilization began to emerge 3,000 years ago in the areas that now comprise Guatemala and Belize, as well as part of southeastern Mexico, Honduras, and El Salvador. The society reached its peak during the Classic period about 250–900 CE. By the time Spaniards reached the so-called New World in the 16th century, the society had largely collapsed and regressed into small agrarian villages for a variety of complex reasons. And long before Garrison arrived at Harvard University as a graduate student in the early 2000s, the once-great society had receded into romantic mystery, a “lost” civilization swallowed by the jungles. His own obsession began several years earlier during a study abroad trip to Mexico’s state of Oaxaca as an undergraduate, when he became enamored with the Maya writing system.

Oaxaca is well outside the area once inhabited by the Maya, but that hardly mattered. Garrison found many “great old Mexican book shops” full of works about the ancient peoples, and he scooped up all he could find—including a tome published in 1915 titled An Introduction to the Study of the Maya Hieroglyphs, for which he paid 150 pesos (about $8).

“Maya writing is oftentimes said to be the most complex writing system ever developed because it is an art style, also,” Garrison said. “The glyphs themselves are works of art, but they don’t mean what they look like—they are reflecting actual language."

"Don’t get me wrong,” he added. “I didn’t understand any of that in this first foray. That’s the end product of all this.”

His first excavation soon after in Belize is when the archaeology bug really bit. “That wasn’t an academic awakening or anything,” Garrison said. “That was just, ’Wow, this is really, really fun—being out here, working hard, getting sweaty, finding cool stuff, meeting a bunch of people my age, [and] everyone’s excited to be doing this adventuresome, weird thing.’” His doctoral work at Harvard University led him to Guatemala and ultimately to his current site of El Zotz, for which he became overall director in 2012. The site is in the shadow of a major Maya center of power at Tikal, and one of the biggest questions about El Zotz is the relationship it had with its more powerful neighbor.

“The answer seems to be shrewd political alliances that changed through time and making decisions that are best for them,” Garrison explained. “Sometimes it’s better to just submit, and other times it’s time to recognize an opportunity and support someone else,” Garrison said.

As for the LiDAR data, it revealed fortifications on a scale un.realized from ground-based visual survey, including a large fortress complex to the northwest of El Zotz that no one knew existed.

“All the defensive features suggest it wasn’t always a peaceful thing,” Garrison said of the relationship dynamics between El Zotz and Tikal. “It wasn’t just palace diplomacy.”

The newly discovered fort will be a major focus of his work moving forward: in August, Garrison received grants from the National Science Foundation and the National Endowment for the Humanities to excavate the fortress over the coming three field seasons. The LiDAR findings did more than inject fresh insight and direction into Garrison’s research. They also reinvigorated his curiosity about the site as a whole.

“My own interests in archaeology have always been about being at the tip of the spear, being the first person in an area doing that baseline research that needs to be done. I like the exploration and discovery aspect of it as much as I enjoy the anthropology and answering those questions,” he said, before he confessed: “I was starting to feel that El Zotz was getting a little stale.”

The LiDAR images themselves are striking, multihued 3-D renderings made even more evocative when you see the same patch of ground with the jungle intact contrasted with the vegetation digitally removed. The results were so captivating that National Geographic produced a documentary that premiered in February titled Lost Treasure of the Maya Snake Kings, which followed a NatGeo explorer as he trekked deep in the jungle to seek out a pyramid detected in the survey. Garrison appeared in the documentary, lending commentary on the LiDAR mapping and its results.

Garrison has just completed his second field season with the image data, and this past summer’s was marked by a more systematic survey—or “groundtruthing”—of the findings, to confirm whether specific features identified in the survey were, in fact, created by humans. The prior season, with the data fresh in hand, he and his crew went after the low-hanging fruit: the larger, more obvious features that immediately jumped out of the data.
Back in Ithaca, senior Kasey Gregory ’19 was contributing to the project in another way: combing through the LiDAR data around El Zotz and marking features she suspected are evidence of looting, such as haphazard trenches dug into structures. The anthropology major had approached Garrison earlier that academic year with an offer to assist in his research.
“At first I was really hesitant to draw them on the data, and then Tom just urged me to put whatever I thought was one down, and he would believe me until the field season, and they actually checked if those areas had looter trenches or not,” she said.
Gregory’s work is the basis for her senior thesis in the Honors Program, which explores how remote sensing technology such as LiDAR can aid archaeologists and protect cultural resources, and she hopes to continue studying archaeology in graduate school. For his part, Garrison would like to get more students working with the LiDAR findings. He'd also like to work with Ithaca College to bring students to Guatemala—if not in the jungles for excavation and survey work, then to help document artifacts in the laboratory he maintains there.
The 2016 LiDAR survey is already the largest remote-sensing endeavor in Mesoamerican archaeology. Plans are in the works for another survey of even greater size, as well. Meanwhile, the work of confirming survey findings with what’s actually on the ground will continue for years to come, not just at El Zotz but for the entire area scanned in 2016 as well. The compiled data allows an unprecedented glimpse of how the Maya civilization developed on a regional scale. The collective, encompassing scope of understanding that can be unlocked from the survey was the focus of a September article co-authored by Garrison and published in the academic journal Science.
“One of the biggest challenges of the data is not viewing it as a whole, but recognizing it’s these pulses: One site was big in the Preclassic period, but then it goes down; then a Classic site comes up in a totally different area,” Garrison noted. The processes that caused those pulses and changes in the Maya civilization will come through excavation. “What LiDAR does is give us the most complete background that we’ve ever had to formulate new questions. So we don’t have to spend all our field time trying to come up with the basic layout of what’s going on,” Garrison said. “That’s there. It just leapfrogs us in terms of the types of things we can look at.”
Unlock more faculty discoveries here:
Betsy Keller's research into Chronic Fatigue Syndrome
Katharine Kitteridge's exploration of Melesina Trench
Gustavo Lincon's look at the Chicano student movement
Te-Wen Lo's attempt to uncover the mysteries of disease 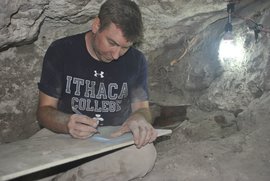 Thomas Garrison in the field in Guatemala. Photo courtesy of the Proyecto Arqueologico El Zotz