No sex, no drugs, but this book still rocks

Praise for Ten Thousand Saints, the debut novel from Ithaca College writing professor Eleanor Henderson, has steadily rolled in since its release in early June. Amazon.com named it best book of the month, and it received strong reviews from the L.A. Times and the New York Times.

The novel tells the story of a hard-core punk teen in the 1980s who, after his best friend’s overdose, decides to go straight edge: no drugs, no sex, no meat. His devotion to the strict lifestyle becomes its own sort of addiction as he rebels against his pot-dealer dad. Publishers Weekly describes the coming-of-age story as “an odyssey encompassing the age of CBGB, Hare Krishnas, zines, and the emergence of AIDS.”

The New York Times review notes that even if you’re too young or too old to be emotionally invested in the time period, “you will still recognize what it is to be part of a larger cultural heartbeat during a moment in history when your own heart is beating so fast, so recklessly, and so loudly.”

Watch a video about the novel here. View and listen to an interview with the author on PBS Newshour here. 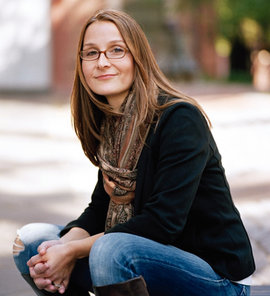 Photo by Nina Subin/courtesy of the author