“Journalism is not [just found in] newspapers,” says Dianne Lynch, dean of the Roy H. Park School of Communications. “If we were starting journalism today and deciding the best way to deliver dynamic, interactive, breaking information relevant to communities, we wouldn’t put it on paper and drop it off on somebody’s porch once a day.”

The media landscape is undeniably changing -- constantly. Corporate-owned media are no longer the sole gatekeepers of information, as more and more journalists produce their own content and distribute it directly through the Internet.

This new environment prompted the creation of the Park Center for Independent Media, which Lynch hopes will become a national think tank on the changing media ecology and its potential implications for students. “The most important public service the academy can provide,” notes Lynch, “is the opportunity for people to come together to develop new visions.” Besides providing a place for national discourse, the center will help the Park School tailor its curricula, internships, and events. “This is not a substitute for [mainstream media],” says Lynch, “but an addition to it. I don’t expect mass media to go away. We just have another option we should be exploring.” The Park School’s longstanding relationships with media corporations, such as ESPN, Disney, and Clear Channel, will remain intact.

The center was launched with a speaker series kicked off by filmmaker Rory Kennedy (see online special). After a nationwide search, Jeff Cohen, founder of the media watchdog group FAIR (Fairness and Accuracy in Reporting) and a prominent media critic and author, was named the center’s inaugural director and associate professor of journalism. “I come,” says Cohen, “as someone who has been inside the corporate media structure and who saw its inadequacies.” For example, Cohen says, that the invasion and occupation of Iraq “will go down as one of the low points in the history of mainstream media” at the same time indie media were getting a lot of things right. Although independent media don’t yet have the clout to help prevent foreign policy disasters, their influence, he believes, is rising. 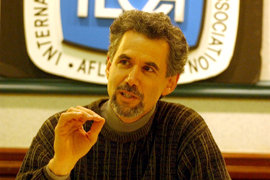