Remembering Karel Husa and his masterpiece, Music for Prague 1968

Karel Husa was relaxing at his summer cottage on Cayuga Lake on August 20, 1968, when he turned on his transistor radio and heard some alarming news: the Warsaw-Pact troops had just invaded his native Czechoslovakia, and thousands of troops and tanks were rolling into Prague.

As a composer, Husa responded the way he knew best—through music. He had just received a commission to write a piece for the concert band at Ithaca College, where he had been appointed a lecturer of composition the year before. Distraught by what was happening in his home country, Husa spent the next six weeks composing what would become his best-known work—Music for Prague 1968.

After an initial performance on campus, the Ithaca College Concert Band premiered the four-movement piece at the Music Educators National Conference, Eastern Division, in Washington, D.C., on January 31, 1969. Within months, bands on college campuses across the country were playing it, and over the next 50 years, Music for Prague 1968 would appear on concert programs more than 10,000 times.

“It was like an earthquake because what I heard and what people heard was something that they had never heard in band music,” said Frank Battisti, ’53, MS ’64, a friend of Husa’s who became the director of the New England Conservatory Wind Ensemble. “It changed the evolution of band and wind ensemble music from that point on.”

In honor of the 50th anniversary of its premiere, the Ithaca College Wind Ensemble performed the roughly 23-minute piece at Alice Tully Hall at Lincoln Center in New York City on April 27. Hoping to inspire another groundbreaking composition, Chris Hughes, director of bands at IC, commissioned Carter Pann, a composer at the forefront of wind ensemble music, to write a new work, which he named Labyrinth, for the concert.

“I thought, wouldn’t it be great if we had a concert for the anniversary of Music for Prague and after that piece, we have a brand-new piece that is going to be significant enough that it’s going to be celebrated 50 years from now,” said Hughes, who directed the concert along with Benjamin Rochford, associate conductor of bands.

FROM PRAGUE TO ITHACA

It was a fluke of history that Husa, who won the Pulitzer Prize for Music in 1969 with his String Quartet No. 3, even became a composer. After growing up in Prague, he decided to study engineering but was forced to abandon his plans when Hitler’s troops occupied Czechoslovakia in 1939 and closed all the technical schools. Husa, who had played violin and piano as a child, enrolled in the Prague Conservatory, earned a doctorate in composition from the Prague Academy of Music, and then moved to Paris to study conducting with Eugene Bigot and Andre Cluytens.

In 1954, Husa arrived in Ithaca after having been invited to Cornell for a position as instructor of music theory. He joined the faculty at IC as a lecturer in composition in 1967.

Dana Wilson, IC’s retired Charles A. Dana Professor of Music, recalled that Husa brought a European touch to the School of Music. “Karel was always dressed rather formally—always in a jacket and tie—and was very gracious to everyone,” said Wilson, who was on the faculty with Husa in the mid-1980s. “But beneath the genteel and polite exterior was a person of great depth and intensity. This was conveyed in this important work but also in most of his music.”

A year after Husa began teaching at IC, Kenneth Snapp, conductor of the concert band, commissioned him to write a piece for the ensemble. The composition would become his second work for band; his first was a concerto for saxophone commissioned in 1960 by Battisti when he was the band director at Ithaca High School.

“Basically, I had never written for a wind group because no one had asked me to,” Husa said in an interview with the Band Director Media Group shortly before his death in 2016. “I had always admired wind music, but as a violinist I was initially drawn more to the orchestral sound.”

Within months of receiving the commission, Husa learned that the Soviet-led Warsaw Pact countries had invaded Czechoslovakia. The attack successfully halted the liberalization reforms known as the Prague Spring, which had been launched by Alexander Dubcek, the secretary of the Communist party of Czechoslovakia.

“Husa was appalled by what he saw was going on in his native country,” said Mark Radice, a professor of music theory, history, and composition at IC and author of Karel Husa: A Composer’s Life in Essays and Documents. “He saw the commission from Ithaca College as a perfect opportunity to make a statement.”

Husa’s siblings were living in Czechoslovakia when 250,000 troops invaded Prague, killing 137 civilians and seriously wounding 500 people. When Czechoslovakia became a Communist country in 1948, Husa’s music was banned there, and he was not able to return to attend his own mother’s funeral.

“I couldn’t believe these two friends, the Soviet Union and Czechoslovakia, would attack each other,” Husa said an interview with Cary Magazine after retiring to North Carolina. “I remember the 1939 occupation by Hitler when I was 18. I knew what freedom was and why people fight for that.”

While composing Music for Prague 1968, Husa used a range of sounds to reflect what he had heard over the radio on those two days in August: the piccolo solo opening the piece mimicked a bird call, symbolizing freedom. Clanging bells referred to Prague’s designation as “the city of a hundred towers,” representing calls of distress and victory. The snare drum signified the troops marching in, and the trombone’s glissando recalled the military airplanes landing.

“You could tell with the drums and the military parts of it—you could almost feel the tanks in the invasion,” said Don Riale ’69, a trumpet player who performed in the world premiere. “It was a very powerful piece.”

The band members who rehearsed the piece with Husa quickly realized that Music for Prague 1968 was not another John Philip Sousa march. Many were aware of the invasion and why Husa was deeply affected by it.

“He was just emotionally torn by what had happened in Prague, and he was a very sensitive man,” said Gary Rockwell ’69, the principal percussionist of the band at the time. “And we were in the ’60s and all the Vietnam stuff was going on, too. It was like someone had thrown a hand grenade in the middle of our college education.”

At rehearsals, which began in October 1968, Husa would experiment with the score, asking the band members to test out his ideas. The students would then pencil in the revisions in their music. “Husa was making changes as we went along,” Riale said. “He would add different sounds and textures that he was going for. If something didn’t quite come off the way he wanted, he would change it.”

Woven through the piece was a 15th-century song of the Hussites—a pre-Protestant Christian movement that originated in Bohemia—called “Ye Warriors of God and His Law.” Husa wrote that the song has been “a symbol of resistance and hope for hundreds of years, whenever fate lay heavy on the Czech nation.”

What was its most experimental scoring technique, however, was the third movement, written exclusively for percussion. Husa divided the percussion players into three groups and assigned each to a different station on the stage.

“This is Husa’s earliest score to explore the possibility of spatial music,” Radice said. “So, not only do we have an organization of the pitches and rhythms, but the place where the sound emanates is part of the musical scheme.”

The Road To Washington

After its unofficial premiere in Ford Auditorium on December 13, 1968, a music review in The Ithaca Journal called the piece a major work that expressed a quest for freedom. “One left after this last work with a strong feeling that music as great as this should not be written about: one should only listen, and be deeply moved,” the reviewer wrote.

Six weeks later, the band embarked on a tour that began with a concert at Rahway High School in Rahway, New Jersey, a blue-collar, working-class town. The next stop was a concert at the Elkton Senior High School in Cecil County, Maryland, where Riale, the trumpet player, had grown up.

The reaction of the audience gathered in the church was “very muted,” Riale recalled. “This is an area that was not particularly sophisticated musically. It was probably the kind of music that none of them had ever heard before—nothing even close. They did applaud at the performance, but it was very reserved.”

The reception at the Music Educators National Conference (MENC), which drew music teachers from elementary school to college, however, was overwhelming. Along with the band, Husa, who attended the premiere, received a standing ovation.

“It was incredibly well received there,” Rockwell said. “It was a staggering performance, and the audience was very emotional.”

As clarinetist Karen Dembow Erler ’70 recalled, playing at the prestigious conference was an unforgettable experience. “It was really exciting because we put everything we had into it,” she said.

After the premiere of Music for Prague 1968, its popularity spread quickly across the country. One conductor, William Revelli, director of bands at the University of Michigan, made it his mission to expose audiences to the piece and performed it more than 150 times with bands in the United States and Europe.

One reason the composition was so widely embraced was that it expressed the anti-Soviet fervor simmering across the country in the 1960s. “We were in the middle of the Cold War, so a lot of ensembles played it for political reasons,” Wilson said. “Any statement against Soviet aggression was a positive statement from the Western perspective.”

At the same time, the piece began attracting attention in Europe, and Husa was invited to conduct it in France. But because concert bands were not as common in Europe, Husa wrote a new version of the work for orchestra. His decision to transcribe it led many American orchestras, including the Boston Symphony, the Chicago Symphony, and the Cleveland Orchestra, to add it to their repertoire.

It was not until 1990—22 years after the composition was written—that Husa returned to his homeland to conduct the piece at Smetana Hall in Prague.

“It was the first time that the piece was permitted to be performed in Czechoslovakia,” Radice said. “At long last, Husa returned to his native country, triumphant, optimistic, and free.”

After retiring from IC and Cornell, Husa moved to Apex, North Carolina, where he lived until his death on December 14, 2016. Yet his legacy continues—through his music, and at IC through a professorship created in his honor to bring renowned composers to campus.

In 1986, the Karel Husa Visiting Professor of Composition was established at IC to provide support for leading composers to visit campus, lecture on their music, and give private lessons to composition majors. The professorship was created by Dana Wilson and two formers deans of the School of Music—Arthur Ostrander and Gregory Woodward (who was a professor of composition when the program was established).

Beyond campus, Music for Prague 1968 continues to be performed, particularly in its 50th anniversary year. The piece is regularly played throughout the world for the message it conveys, Radice said.

“It’s a piece that addresses a universal longing for freedom, and that resonates with any person in any land,” he said. “Fortunately, in the case of Czechoslovakia, the story of the struggle had a happy outcome, and so the work is not only an optimistic work but also a beacon of hope.” 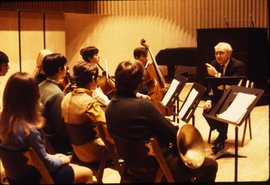