An IC English professor and his onetime student stumble upon literary treasures.    by George Sapio

Researchers love a mystery. After all, sleuthing through history is what they do, many times without ever uncovering what they’re looking for. But sometimes they get lucky.

Twomey, the Dana Professor of Humanities and Arts, uncovered a letter from the early 14th century that seems to satirize the relationship between England’s King Edward II and Piers Gaveston, the king’s court favorite. And Hartman, during research at the Swedish National Library in Stockholm, came across a lost letter written in 1843 by Henry David Thoreau to his mentor, Ralph Waldo Emerson.

These were exciting finds for the medievalist and the American literature scholar, yet both letters presented their discoverers with challenges. The letter referencing Gaveston not only was written in the margins of an existing (handwritten) book, but was also written in the voice of Morgan le Fay, a legendary character. The satire does not actually mention Gaveston by last name, referencing only a “Piers the Fierce” who is engaged in behavior the writer dislikes.

Twomey thinks all three points have simple explanations. First, he says, “Writing material was very scarce and expensive, so if you had access to discarded books you’d use their pages as scrap paper.”

Second, Twomey believes the author deliberately wrote his satirical missive in the voice of Morgan le Fay, King Arthur’s legendary half-sister, on la page containing lunar charts. Morgan was female, associated with water, and a reputed shape-shifter; in astrological terms the moon also represents both femininity and water, and changes shape itself through its cycle. “That the letter was written on a page containing lunar charts,” Twomey muses, “may have been a mnemonic device for the author to remember where he wrote it.”

Third, Gaveston, a wealthy and powerful knight, was referenced as someone who’s “reaching for the moon,” which, Twomey says, alludes to his rapid and much-resented rise to power in Edward II’s court. “The placement of the phrase on this particular page, containing lunar charts,” Twomey points out, “is too coincidental to ignore.”

Twomey thinks the letter was probably never intended for publication; it might even have been written more as a private journal than as something meant for sharing. The identity of the author so far remains a mystery, but Twomey has ideas based on people who had both the education and the political motives.

While Twomey was presented with a new puzzle, Hartman found the answer to another while writing an article for the semiannual journal The Concord Saunterer marking the sesquicentennial of the publication of Thoreau’s Walden.

He requested a volume from a 20-volume 1906 edition of Thoreau’s collected writings from the National Library of Sweden in Stockholm. When he received the volume he realized that it was not as it had been catalogued. “I recognized from the deluxe format and binding,” Hartman recalls, “that it was in fact a rare manuscript edition from the same year” — one that contained additional writings from the author.

Soon after that, Hartman found a further “tipped in” manuscript in another volume in the edition; this turned out to be one of the three known lost Thoreau letters to Emerson (and had no relation to the first manuscript found). “This is something that happens in fiction, not reality,” Hartman says.

The six-page missive, dated June 8, 1843, describes Thoreau’s initial encounter with the writer Henry James Sr. and attests to his disapproval of life in New York City. The letter was known to have existed, but the clues as to where it might be had dried up.

“In all likelihood,” Hartman explains, “one of the set’s [various] owners added the letter to the set. We know that the manuscript edition was purchased from a London antiquities dealer by the National Library of Sweden, so this leaves the question open as to when exactly the letter was added to the set and by whom.”

An associate professor of English and American literature in the English department of Växjö University, Hartman has lived in Sweden most of the time since 1991. He and his wife, Jenny, have a five-year-old son, Dylan, and two-year-old daughter, Elise; they are expecting their third child in February. Hartman has just begun a five-year position as senior research fellow in American literature at Uppsala University, funded through a grant from the Swedish Research Council to carry out a major study of environmental consciousness in modern American literature — one of his passions as an “eco-critic.”

Twomey teaches medieval literature and English language arts courses at Ithaca College, where he has worked since 1980. His wife, Paula, taught at Ithaca High School until retiring two years ago; they have two grown daughters, Laura ’01 and Christina.

Hartman was a student of Twomey’s at IC, taking his Medieval Literature and Shakespeare classes as well as an independent study of medieval Germanic and Norse literature.

“Michael was a passionate and tough teacher who encouraged me and made the work interesting and exciting,” Hartman recalls. “The quality and effectiveness of his teaching were at a level I had rarely encountered before.”

Twomey returns the compliment. “Steve distinguished himself by his desire to learn, as well as by his voracious reading,” he says.

The two stayed in touch after Hartman graduated. “I couldn’t tell you how or when it happened,” Twomey says, “but somewhere along the way, our relationship grew from teacher and student into equals and friends.”

The friends keep each other abreast of their work and personal lives, and Hartman combines visits to his family in Elmira with visits to Ithaca to see Twomey and other former teachers. Their friendship remains dynamic — perhaps because they specialize in different eras and traditions of literature, but also perhaps because it’s based on mutual respect, and a shared love of mysteries. 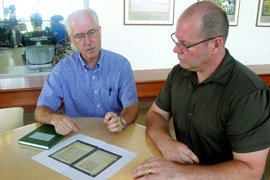 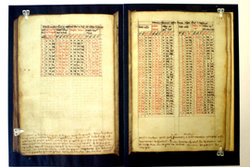 Twomey deciphered the page above, containing lunar charts, on which the satirical notes were made in the Arthurian era; and, below, the envelope and sample pages from Henry David Thoreau's 1843 letter to his friend and mentor Ralph Waldo Emerson. The letter references Henry James as well as Thoreau's aversion to living in Brooklyn. Twomey's findings were published in an edition of the journal Arthurian Literature in 2008; Hartman's piece on his find, plus a correct transcription of Thoreau's letter, will appear in the Thoreau Society Bulletin in 2009.

Thoreau letters courtesy of the National Library of Sweden 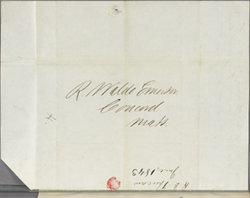 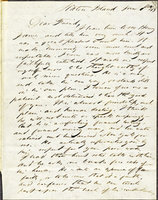 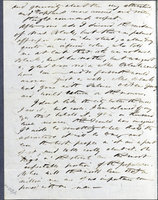