Te-Wen Lo is searching for purpose — at the cellular level. The assistant professor of biology researches how proteins determine very specific and well-regulated cell functions in organisms.

“The interesting question to me is: how does one thing get its specificity for all these different processes?” she said. “How does it know when and where it needs to be, and what it needs to interact with to do the things that it needs to do?”

Cells receive their commands like this: A protein that juts out from the cell connects to external proteins coded with instructions that dictate how the cell should develop or operate within an organism. If something goes wrong with that receptor protein, the cell won’t carry out instructions properly. In humans, such faulty cellular function can result in disease, including certain cancers.

Lo is specifically focused on the fibroblast growth factor, or FGF receptor — which can cause a cell to operate any number of ways depending on the instruction-bearing protein, or ligand, it binds with. In complex organisms like humans, there are several locations on the FGF protein that can bind with over 20 differ.ent ligands, in any number of combinations.

“You can imagine that matrix of interactions gets very large,” Lo said.

She uses a model organism approach and focuses her research on the version of the FGF receptor found in a less complicated organism: the tiny worm Caenorhabditis elegans. She’s examining how different structures within the worm’s EGL.15 receptor protein influence its cellular mechanisms. EGL-15 has one receptor capable of binding with only two ligands.

“The hope is that by learning more about how this receptor functions in this tiny little worm, we can better understand the role of the human version in human diseases,” she said. “It’s a much simpler system, and it’s much more easily manipulatable.”

Depending on which of the two ligands EGL-15 binds with, its cell will either play a role in fluid regulation in the worm or a role in reproduction. A better under.standing of how the receptor protein works—what turns it on or off, so to speak — could eventually help inform better drug treatment for human diseases in which the FGF family of protein receptors play a role.

In 2017, Lo received a grant from the National Institutes of Health totaling $337,519. The money funds two projects de.signed to understand how EGL-15 turns on and off. In the first, genetic sequences in the EGL-15 strand that play a role in the cell’s two possible functions are identified from the two sections known to bind with ligands. Then mutated genes are introduced to determine what specific components are interacting with EGL-15. The project isolates mutated versions of the EGL-15 protein in a test tube. Some of those mutations are confirmed to prohibit the reproductive role of the cell. Ground-up worms are added to the tube to see which proteins in the worms interact with the mutated receptor.

The grant money also funds undergraduate student researchers in Lo’s lab and allows her students to attend conferences to bolster their academic and professional portfolios. For Lo, the opportunities to mentor students are the most rewarding part of her research.

"I think that’s one of the reasons I wanted this job specifically, at an undergraduate institution,” she said. “When I think about the role that people have played in my life, the most influential ones have been the ones early on.”

In 2017, then-junior Dallas Fonseca ’18 received both a Barry Goldwater Scholarship — one of the most distinguished awards offered in the sciences — and an equally competitive Amgen Scholars Program scholarship to spend the summer working in a lab at the Massachusetts Institute of Technology.

Lo helped Fonseca hone his applications to those scholarships, and she’s just as committed to helping her students apply to conferences or graduate schools. “Being [a smaller school], every student gets all the attention they would ever want. I think it’s really easy to help them find opportunities and then to help them get those opportunities,” she said.

She also encourages her students to engage with their communities about science in general and to pay forward their own positive influences whenever they can. “We are not going to suck as human beings” is an unofficial mantra in her lab.

“It’s really cool when people are interested in what you’re studying,” she admits. “But I’ve realized over time—especially being here—that what is really satisfying is knowing that you contributed not just one specific fact or piece of knowledge [to science], but someone who could potentially change other people’s lives and science. I feel like it’s a bigger impact in that way.” 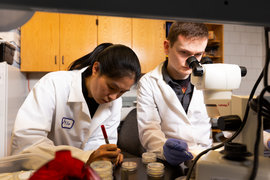 Te Wen Lo and Dallas Fonseca in the lab. Photo by Giovanni Santacroce