Shelley Roden ’96 keeps a grade-school report card with the following note from her teacher behind her work desk: “Shelley moves from quiet and pensive to making strange noises while walking in the hall.”

Roden says her teacher’s observations were spot on. As a child growing up in Victor, New York, Roden made random noises that were interruptive both in the classroom and in Girl Scout meetings. But it turns out, she just needed an outlet. Today, Roden is a Foley artist, spending her time running, splashing, and banging at the Skywalker Archives Foley stage in Northern California, all in the name of creating a rich soundtrack to enhance movies, TV shows, and video games. Roden’s résumé includes the feature films Moana, Black Panther, and Dunkirk, which won the 2017 Academy Award for best sound editing, and the Netflix show Mindhunter.

It’s a career that was sparked by a summer course at Ithaca College. Roden majored in cinema and photography and worked as a cinematographer for her feature film classes, but when a professor placed her in the sound department one summer, things changed.

“I loved living in the world of sound where I could put on my earphones and just observe and listen,” Roden says.

She picked up an audio minor and through Ithaca’s Los Angeles program secured an internship at a postproduction sound house, where she began performing Foley for student film projects after hours. A sound supervisor encouraged her to pursue Foley as a career, and Roden went on to work freelance jobs before joining Skywalker Sound in 2015.

Foley teams are necessary in postproduction because a microphone on the set of a movie or TV show is meant to capture dialogue. With microphones tuned to what the actors are saying, whatever they are doing with their hands or body doesn’t get picked up. Adding the sound of footsteps (using the Foley artists’ footfalls), the clashing of swords (with props), or the swish of a character’s jacket (made by moving cloth) helps the audience feel like they’re in the scene.

“Let me compare it to cooking,” says Roden. “Imagine the production sound as a tomato sauce base. Foley does not add more tomatoes but augments and enhances using spices. The end result becomes a complex, savory experience.”

For each project, Roden and her colleagues figure out how to layer sounds into a spectrum that’s also taken up by dialogue, music, and hard effects. Working the Foley into that sonic real estate can be a challenge, as can selecting the right prop or shoe and manipulating it to create a distinctive sound. According to Roden, the work is a team effort.

“Collaboration can result in greatness,” Roden says. “Together with my Foley partner John Roesch and Foley mixer Scott Curtis, we toss around ideas and experiment until we achieve something better.”

There are some props Roden uses over and over— like a stretchy-sounding latex Tin Man mask that has been the audio for moments such as Elastigirl stretching in the Incredibles 2 and a fish trying to get out from between two rocks in Finding Dory. But sometimes Roden and her team build their own props or go shopping for new ones. For Avengers—where every character has a metal weapon, wears armor, and walks across the floor of a spaceship—Roden and her team shopped at salvage yards to find objects that would distinguish the metal sounds from one another. For Roden, these challenges teach her new things from one movie to the next.

“It’s a process of discovery and experimentation, and I love that,” says Roden. “Every second I get to do this, I feel so lucky. I get to move around, to be expressive and inventive, and to have fun with my team. Every day presents a different challenge."

Shelley Roden was at Ithaca College on April 6, presenting at the college’s Music and Sound for Picture Conference. 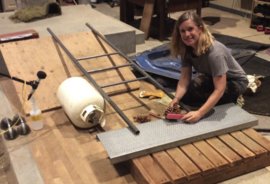