In the city that never sleeps, Themys Brito ’00 helps make sure New Yorkers have around-the-clock access to local news.

An executive producer at NY1 Noticias—the Spanishlanguage counterpart to New York City’s 24-hour news channel NY1—Brito oversees the writers, producers, anchors, and reporters behind the morning news. Her work includes a newly launched live newscast in the 7 o’clock hour, as well as designing what her team calls “the wheel,” a news show that re-airs regularly throughout the day.

Working in television has been a lifelong dream for Brito, who grew up in Santo Domingo, Dominican Republic. When she was just nine years old, she participated in a televised trivia show sponsored by a children’s magazine, pitting her neighborhood kids’ club against another.

“When I went to the contest and I saw the station and everything that was television, I knew then that was what I wanted,” she recalls.

She got her chance just a few years later.

“It just happened to be a coincidence that when my family moved to Yonkers, the high school that I ended up going to had a TV station,” says Brito, who created a Latin music video show.

Alumni from her high school who worked in the field pointed her to Ithaca College, a natural fit thanks to its television production major and hands-on experience through ICTV. While at IC, she had a music video show on ICTV and dabbled in radio at WICB.

Brito’s first job after graduation was at a Manhattan production house. A key part of the role: monitoring talk shows for content, like expletives, that shouldn’t make it on air.

“I had to watch talk shows all day,” she says. “It’s one thing to have them in the background, but to be paying attention to every single thing? It’s not what I wanted to do.”

So when Univision Tampa asked Brito to interview for a role as an editor and video journalist, she jumped on it—despite never having been to Florida.

“They let me explore in different positions, and I was very grateful for that,” she says. “I tried so many different things that really prepared me for what I’m doing right now.”

Brito even turned her unfamiliarity with Florida into an opportunity, pitching a series of travel segments about where people could take their families to have fun in the Tampa Bay area.

She returned to New York in 2005, landing an associate producer position at NY1 Noticias just as the channel was preparing to debut a new politics show, Pura Política: Voces de la Ciudad.

“I started, really, thinking about staying there for maybe a year,” says Brito. “But the culture was so welcoming, and they promoted so much growth that I ended up staying.”

Even as she has taken on larger leadership roles, Brito still carves out opportunities to shoot and write stories she finds meaningful—like an interview with IC’s president Shirley M. Collado, a fellow Dominicana who grew up in Brooklyn.

“Presenting those kind of stories that really inspire our community is so important,” she says. “It’s such a privilege to be able to find people that can push our community forward.” 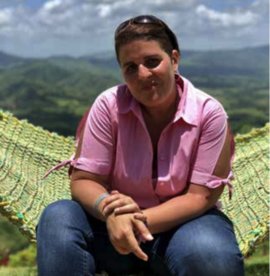